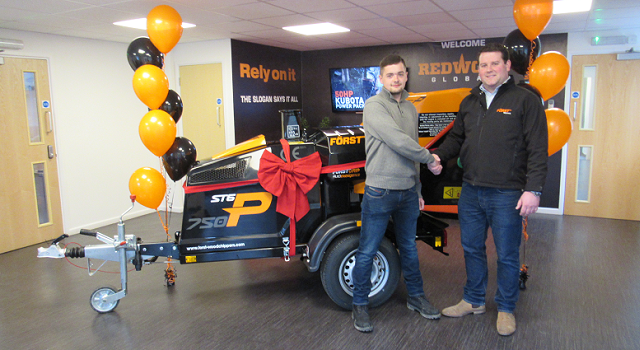 Tony Dighton of T.D Environmental Services has walked away with a brand new Först ST6 P woodchipper after being crowned the lucky winner of the manufacturer’s ‘Win a Chipper’ competition.

The competition saw tree surgeons, contractors and arborists alike entered into a prize draw after purchasing a Först t-shirt. With hundreds of entries, the Mayor of Andover, Hampshire was on hand to announce the 22 year-old as the overall winner.

Tony said: “To say I’m over the moon to win a brand new Först woodchipper is a bit of an understatement! My business has been operating for nearly three years now and is becoming established, but I have always had to hire in equipment. Now being the proud owner of my first piece of machinery in the ST6 P will really help take my business to the next level.”

The ST6 P is Först’s first petrol powered sub 750kg woodchipper and is an extension of the manufacturer’s range of six-inch capacity machines. Powered by a 37hp V twin engine, the woodchipper is not only prepared for the Stage V emissions regulations coming into force in 2019, but also matches the strength and performance that users have come to expect from Först’s diesel powered machines.

Doug Ghinn, Director at Först, said: “Everyone at Först is delighted for Tony and we are thankful so many people entered the competition. Tony is in the early stages of his career and the addition to such a high performance woodchipper will be of great benefit to his business.”