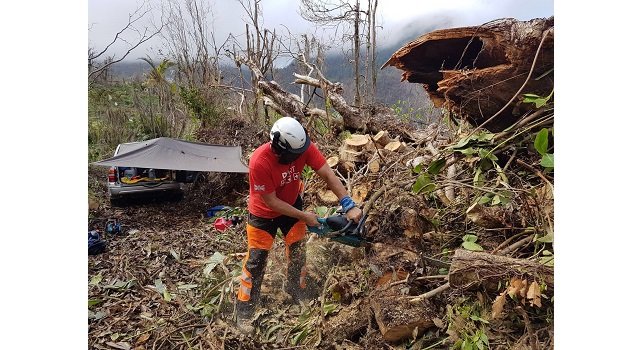 Först, one of the UK’s leading manufacturers of woodchippers, has helped make DART’s latest mission a reality by donating funds to its Caribbean expedition.

In the wake of Hurricane Maria, DART (Disaster Arborist Response Team) set about offering its services to the Dominican government’s Emergency Operations Centre. After receiving funding from Först and a number of other benefactors, a team of DART arborists from around the UK headed out for an initial deployment in mid September.

Such was DART’s impact clearing roads blocked by fallen trees, a second and larger team was sent out on 6 October to provide 28 days of continuous support after a specific request of Dominican’s Foreign Minister, Francine Baron. As well as road clearance, the DART team has helped clear schools and hospitals and is now working in collaboration with the United Nations and UK government, delivering chainsaw safety training to the Domican Fire Department amongst others.

Douglas Ghinn, director at Först, said: “The DART organisation is something the Arb industry, indeed the whole of the UK, should be really proud of. It is a great honour for Först to support the team’s Caribbean deployment; with the work the DART arborists have done clearly making a big impact.

“After natural disasters such as Hurricane Maria, the talk in the media is often about the lack of food or power supply. It is easy to skip over the fact that the damage done by trees is a big contributor to these issues.

“The DART team members are true British heroes; and that is not a word I use lightly. I wish the team, the Dominican government and the local communities affected all the best as they continue with their recovery mission.”

Jenny Long, a volunteer from DART, added: “Despite the hard work and conditions, our team were all very proud to represent the professionalism of the Arborist Industry within the international disaster relief framework and were overwhelmed by the hospitality and friendship of the people of Dominica, but most of all by their courage and resilience in the face of adversity”.