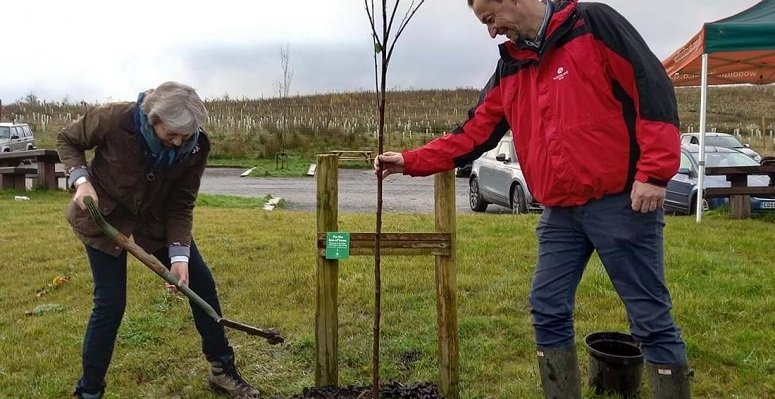 The 1,700-acre Smithills estate near Bolton is one of the Woodland Trust’s biggest sites . It was the setting for the planting of the first tree in a scheme that aims to create a forest of 50 million trees covering some 10,000 square miles – from Liverpool and Chester to Hull.

Already more than 3.5 million trees have been planted and a recent announcement revealed a Government boost of £15 million which will see an extra one million trees over the next year put into the ground.

On her way back from the COP26 climate change conference – in which world leaders pledged to end deforestation by 2030 and nature-based solutions to tackling climate change have enjoyed a strong profile – Mrs May this week met the Chief Executive of the Woodland Trust, Dr Darren Moorcroft. They planted trees at the special site which features key protected habitats including carbon locking peatlands, moorlands, upland grasslands and new woodlands.

Mrs May hailed the Northern Forest project as a “ground-breaking way to create a life supporting forest”. Led by the Woodland Trust, it is bringing together community forest groups from across the north, including Mersey Forest, White Rose Forest, Manchester City of Trees, Hey Woods.

She said: “As Prime Minister, I announced a new Northern Forest of 50 million trees as part of the Government’s 25 Year Environment Plan. Today, it was a pleasure to visit the Smithills Estate and see the progress so far. Nature is an important ally in the fight against climate change and the work of the Woodland Trust is a shining example of what can be achieved.”

Dr Moorcroft said: “The Northern Forest brings a powerful and very tangible environmental dimension to levelling up and other efforts to improve infrastructure and quality of life in the north of England. It will help shape places where people will want to live, work and spend leisure time.

“Over the centuries, our woodlands have been extremely fragmented with trees outside woods suffering noticeably.

“The forest will create natural habitats which will help our wildlife to thrive, creating better connected and extensive new woodland and protecting ancient woodlands. In turn, the establishment of 24,000 hectares (almost 60,000 acres) of trees, which have the potential to absorb up to 7.5 million tonnes of carbon dioxide, will do wonders for the country’s bid to become carbon neutral by 2050.”

The Northern Forest area is home to 13 million people but tree cover is just 7.6% compared to the national average of 13%. The new forest will bring many widespread benefits including:

The Woodland Trust has committed to planting 50 million trees by 2025. It is on the eve  of sending more than 700,000 free native trees to schools and communities to kickstart an autumnal blitz on tree planting. A further 680,000 trees are available to apply for now to be planted next March. It is off the back of the charity launching its annual Big Climate Fightback campaign which is backed by players of People’s Postcode Lottery.