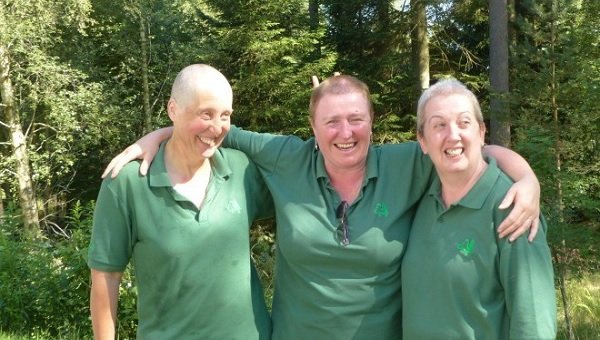 Three north-east women who work for the Forestry Commission have had their locks cut off – and raised £2,000 for local cancer charities in the process.

Jackie Cumberbirch, Heather McPherson and Angie Smith have each had family or friends affected by the disease, and wanted to show their support for patients as well as the staff and volunteers who helped them.

The trio, who all work in the Forestry Commission’s Huntly based team, shaved their heads earlier this week, and have already smashed their fundraising target of £600 for Friends of Anchor and the Highland Hospice.

Ms Smith said: “We wanted to do something to help and choosing to shave our heads is a way of recognising the courage, determination and stamina shown by all who have to cope with cancer and who have no choice about losing their hair.

“It is also about recognising the hard work, bravery and commitment of the staff and volunteers who work alongside people facing these terrible illnesses. It is a small way to say a big thank you to them for their dedication and compassion.”

Sarah-Jane Hogg, PR and fundraising manager at Friends of Anchor, said: “We are indebted to the three quines for their sheer courage in shaving their hair off to raise money for Friends of Anchor.

“It is an incredible sum of money to have raised, every penny of which will make a direct difference for those fighting cancer in the north-east.”