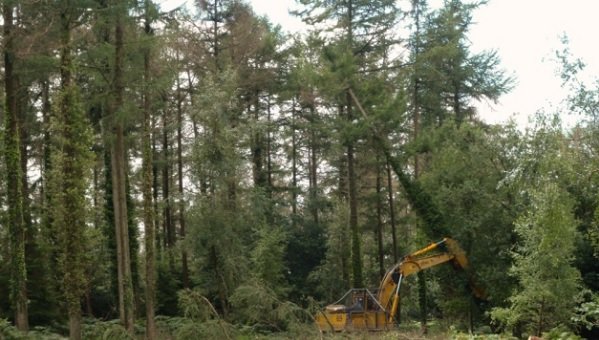 Some tracks in the Galloway Forest Park have been closed temporarily as the Forestry Commission Scotland continue to battle larch disease.

The forestry sector in south west Scotland has been working flat out since August 2013 to combat the impact of a deadly plant disease affecting larch in this area – Phytophthora ramorum.

As much as 5,000ha of larch is affected and timber harvesters and processors are working to fell infected and dying trees in a bid to slow the disease’s spread further east and north and to extract as much marketable timber as possible.

In the past ten months Forestry Commission Scotland felled 603 hectares of diseased larch on the national forest estate and will this year fell up to 900 hectares – that’s approximately one million trees – which is in addition to the 60 hectares of larch normally felled annually.

A spokesperson for Forestry Commission Scotland, said; “The disease poses no risk to people or animals but dead trees are a potential hazard – rotting upper stem or branches could break off, especially in high winds – so visitors are advised to give such trees a wide berth. The Commission is attending to the additional dead trees which occur in areas of high public use but members of the public should be mindful that some tracks will be temporarily closed and diversions put in place until such time as timber harvesting operations in these areas are complete.

“It is a big challenge, and people may be noticing more timber traffic on the roads, but they should rest assured that the Galloway Forest Park is still open for business. Although there are sites within the Park where harvesting operations are underway and where safety signs and diversions are in place.

“We would ask that people observe any guidance or advice and that they help us by practicing good biosecurity, brushing mud and plant material off boots, bike wheels and so on, and taking nothing out of the forest that you didn’t bring in with you.

“A sustained effort will be required over several years to get on top of the disease and to use this as a further opportunity to ‘restructure’ the forests so that they continue to benefit all those who depend on them for enjoyment and livelihoods, as well as provide habitats for a wide range of species.”

“The felling programme drawn up by Forest Enterprise Scotland to tackle the impact of this disease will continue until at least 2015 and will increase the annual Galloway harvest from about 700,000 tonnes to over 1 million tonnes.

“The Commission will continue to consider replanting options on a site by site basis to ensure that the next generation of trees on these cleared areas will continue to make Galloway a valuable asset for local people, visitors and wildlife, as well as providing much needed timber for industry and a great way to store carbon.

“Early indications this spring suggest that in 2014 the disease has not repeated last spring’s exceptional pace, scale and severity of impact on larch in the south west of Scotland – but Forestry Commission Scotland is continuing to keep a very close eye on this.