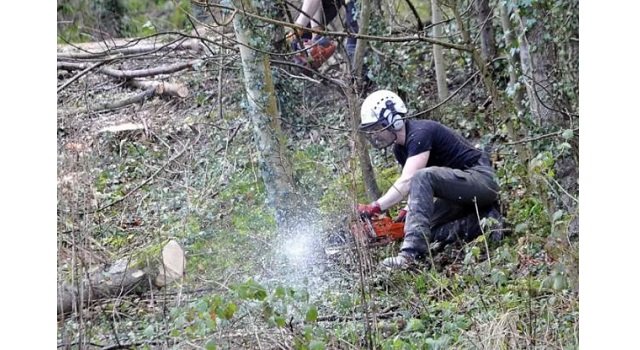 The axeing of mature trees by a housing developer is being investigated by the Forestry Commission Scotland.

A spokesman for the Commission said today (Monday) it is treating the ripping up of trees at the Lenzie site last week by Muir Homes “as an alleged illegal felling.”

After seeing a Herald report online, the Commission requested the developers stop the work at the site at the junction of Initiative Road and Garnbager Road.

Muir could face a fine of up to £2,500 and be ordered to replace the trees.

The tree-felling began on Monday, March 6, despite the firm being denied planning permission by East Dunbartonshire Council to build seven houses next to the Larkfield Centre last November.

The developers have lodged an appeal which is due to be heard later this month.

“Subject to a number of exemptions, it is an offence to fell trees without a licence which must be obtained in advance from Forestry Commission Scotland.

“We are now investigating this and treating it as an alleged illegal felling. We’ve requested that the landowner does not carry out any further works on the site or that any of the timber is removed.

“Measurements of the volume of timber felled have been taken and after further consideration we shall decide whether a report should be submitted to the Procurator Fiscal.

“If a Procurator Fiscal decides an illegal felling has taken place then a fine of up to £2,500, or twice the value of the trees, can be brought forward. A restocking notice can also be served on the owner so that the trees are then replaced.”

Planning chiefs at the council had told the Herald last week the council was powerless to stop the felling.

Thomas Glen, Depute Chief Executive – Place, Neighbourhood & Corporate Assets at East Dunbartonshire Council, said: “The council’s planning service has confirmed that the trees within the site are not subject to a Tree Preservation Order or within a Conservation Area, therefore the land owner does not require planning permission to cut them down.”

The Herald received several calls from people slamming the company for starting work on “the presumption that they would win the appeal”, with some questioning if they were allowed to remove the trees.

The Herald was unable to obtain a comment from Muir Homes about the tree felling.

Planning chiefs have said they are powerless to stop a developer ripping up trees in preparation for a housing project that was rejected by East Dunbartonshire Council.

Muir Homes was denied planning permission to build seven houses next to the Larkfield Centre at the junction of Initiative Road and Garngaber Road, in Lenzie, last November.