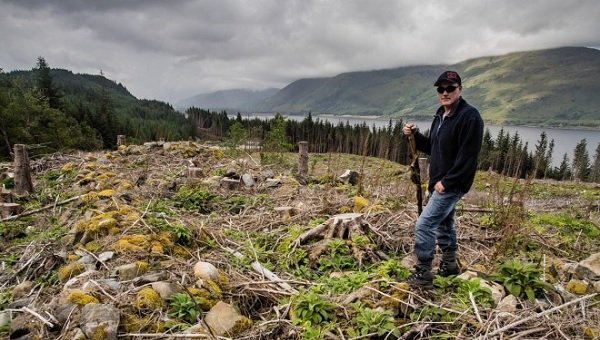 Forestry Commission Scotland has been accused of “vandalising” an old Cameron settlement in Lochaber by felling trees over its ancient buildings.

As well as being a settlement, the site at Corrychurrachan in Glen Righ Forest, in the hills above Loch Linnhe, is also one of the last places in Scotland where fairies were reported to have been seen.

Jeff Ward, who grew up in Fort William but now lives in Indonesia, was shocked to discover the trees had been felled on a recent visit home.

The 49-year-old, who works in natural heritage and is a history enthusiast, said it had been a beautiful and “magical” spot before the trees were felled.

He said: “Does the forestry commission understand that there is important archaeology in the earth on this site?

“They have plucked trees from the middle and around the houses. This is a settlement, not a group of single dwellings.”

He also suggested signs and interpretative information should be erected at the site so visitors can “pay respects” in the future.

A Forestry Commission Scotland spokesman last night the work was part of a planned felling programme, and that extensive archaeological surveys had been carried along, with the ancient monuments recorded.

“However, in an unfortunate twist of fate and before any work had taken place, strong winds blew an extensive area of trees down in and around the sites,” he said.

“What we have been doing now, with input from our archaeologist and heritage teams, is trying carefully to remove the windblown material as sensitively as possible.”

The spokesman added the trees that had not blown down had been cut, as they were a “potential hazard” to the site, as they had been left exposed.

“In line with our archaeological surveys and industry best practice, we removed these trees to help protect the site and for public safety,” he said.