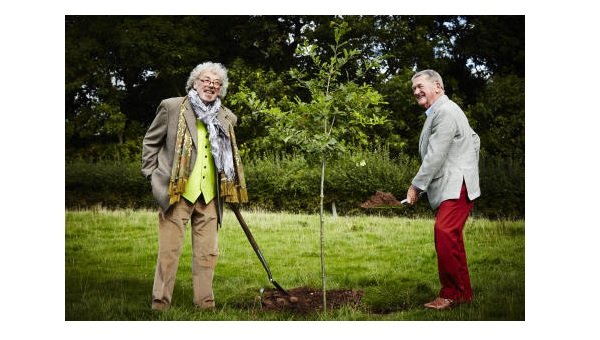 A media maverick who was the driving force behind plans to create a forest burial ground in Great Alne has died.

Felix Dennis passed away on  last Sunday (June 22) surrounded by loved ones at his Dorsington home, just outside Stratford, at the age of 67, after a ‘long and painful’ battle with throat cancer.

A statement released by his representatives on Monday read: “We are deeply saddened to announce that Felix Dennis passed away yesterday surrounded by his loved ones.

“After a long and painful battle with cancer, Felix died peacefully at his home in Dorsington, aged 67.

“Felix was a publishing legend, famed for his maverick and entrepreneurial style and, more lately, a successful and much loved poet.

“He will be greatly missed.

“Thank you to the support and kindness of those who share our feelings for Felix, and we ask that you respect our privacy during our time of grief.”

Mr Dennis was one of the central figures who brought ’60s counterculture magazine Oz to a large audience, editing the London edition and later, in 1971, becoming embroiled in an obscenity trial where his conviction was quashed on appeal.

He then set up his own magazine publishing company, Dennis Publishing, in 1973, launching successful titles such as Maxim and owning The Week, Viz, and Health & Fitness.

Just some of his many life highlights include him making a chart single with John Lennon, playing on stage with Mick Jagger, writing six best-selling collections of poetry and planting 300 acres of land each year with native British broadleaf trees to realise his Heart of England Forest dream.

Last year he reached the milestone of planting his millionth tree in the heart of his forest just outside Great Alne.

A further 100,000 trees have been planted since that ceremony and Mr Dennis’ dream will continue despite his passing, as will the natural burial site within the forest, providing space for up to 133 burials a year.

Mr Dennis had already set out his intentions for his funeral before his death.

“I am a born-again atheist, so there isn’t going to be a funeral. I will be buried in a linen wrap in a cardboard coffin in my forest with an oak tree planted on my head.”