Fly tipping is taking away vital resources from Devon’s forests 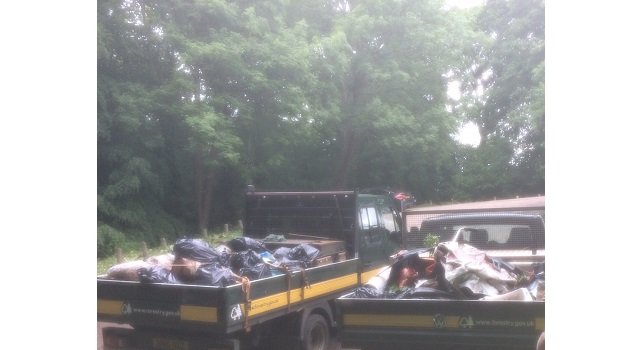 The Forestry Commission is asking local people to be vigilant in reporting any incidents of fly tipping that they witness in Devon’s forests, particularly on the hugely sensitive site at Stoke Woods.

Illegal fly tipping regularly takes place at Stoke Woods which results in a large scale clear up operations involving staff from the Forestry Commission with continued and valuable support from Exeter City Council.

Over recent months the Forestry Commission have had to deal with a range of fly tip including; building rubble, discarded tarmac, asbestos sheeting, bags full of domestic and garden waste, hospital waste, tyres, bags of human excrement, furniture and white goods. The estimated cost of this is £15,000 in total.  Stoke Woods is classified as a SSSI (Site of Special Scientific Interest) which means it is a highly important site for wildlife.

Community Ranger for East Devon, Rob Greenhalgh, explains: “The forests are here for everyone to enjoy but sadly, some people are abusing them by dumping their rubbish.  Over half of fly tipping incidents require specialist moving and disposal, which is the reason it is disposed of illegally.  Because of this, a significant proportion of our budget is being absorbed by cleaning up fly-tips, which would be better spent on looking after the forest.

“The waste itself can also be of concern, and can present a risk to the environment and people. Whilst we do monitor the forest carefully, if people see anything untoward in more remote areas, we would ask them to report it to us as soon as they can.

“We are not able to keep watch on all our forests, all the time. We rely on our neighbours and regular visitors to help us combat this problem by reporting any incidents that they witness, giving as much detail as they can include the date and time of the incident as well as vehicle registration numbers if possible.  If we are able to arm the Environment Agency with this information it makes a prosecution much more likely.”

The recent fly tip removal saw nearly a tonne of waste collected from an area 150 yards which runs alongside Pennsylvania Road.

To report any incidents or for more information please email Rob – robert.greenhalgh@forestry.gsi.gov.uk