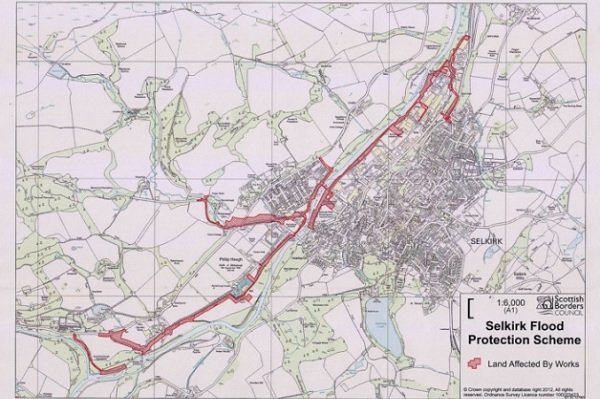 Conor Price, who manages the £31.4million project to protect the lower town from floods, said plans made public in 2012 estimated 2,311 trees would need to be cut down. As of last week, he told us, 1,600 had been felled, with 700 more marked to go by the week before Christmas. As part of planning conditions, he promised, two new trees would be replanted for each one lost.

“The project team do recognise that tree removal is always an emotive subject,” he added, “and that the people of Selkirk are currently experiencing the removal of a large number of trees over a short period.

“I am disappointed there are people who feel they have been misled. I would suggest that neither myself or any member of the project team ever suggested ‘only a few trees’ would be felled as this would be deeply misleading, and completely misses the fact that this is a major civil engineering project.”

The scheme has not felled more trees than was estimated, he argued, citing documents and a Limit of Land Affected map, which were made publicly available during the approval process in 2012.

Mr Price explained: “This plan defined the areas where trees would be removed, and estimated the total number of trees at 2,311.

“The tree removal is programmed to be completed the week before Christmas.

“The scheme is required to replace every tree removed at a minimum ratio of two-to-one (this is a planning condition). The project team have been making every effort possible to preserve and avoid felling mature trees.

“A minor redesign of the diverted overhead power line alignment managed to avoid and thereby save four mature oak trees adjacent Murray’s Cauld. Whilst trees have been removed in this area, the retention of these approximately 200-year-old oaks means that once the area is replanted after construction, it will resume its current state of forest cover within 20 years, rather than 200 years if the oaks were lost.”

He said: “Similarly, protection of key trees at Victoria Park and elsewhere is the priority.”