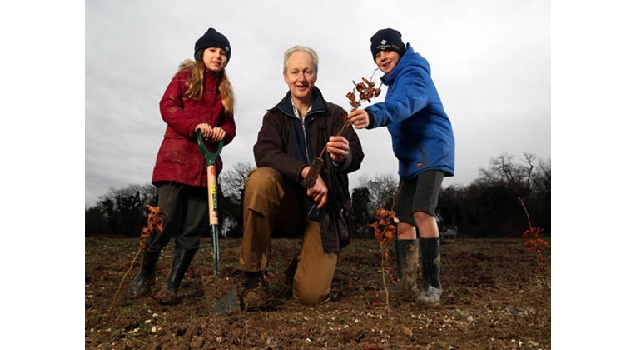 The first of over 200,000 trees have been planted by a special guest at Langley Vale in Surrey.

Today saw the first tree go in the ground at the Woodland Trust’s flagship Centenary Wood in Epsom to mark the start of a project that will see over 200,000 trees planted at the site and millions of trees planted across the UK as a tribute to all those involved in the First World War.

The 640 acre site (bigger than the Olympic park) next to the Epsom Downs (where Lord Kitchener inspected the troops prior to deployment and British troops were trained) will become the Woodland Trust’s Flagship Centenary Wood.

As well as over 200,000 trees the Trust will create avenues of trees, fields of poppies and other features.

The first trees at the site are due to be planted on 12th December; this will include the first tree planted by local school children, volunteers and Sainsbury’s representative David Appleton.

Sainsbury’s has hand-picked David Appleton from Diss, Suffolk to plant the first Sainsbury’s funded tree in honour of his four great-uncles, George, Charles, Henry and Frances James, who were all killed in action between 1915 and 1916.

Mr Appleton said: “I think the new Centenary Woods are as fitting a means of commemoration as can be imagined: practical, beneficial and long-term sustainable. A wood is the polar opposite of war – a beautiful, peaceful oasis of calm and life which throws into sharp contrast all that war brings.”

Additionally, people can dedicate a tree at the site to loved ones, ancestors or namesakes as a special thank you to a past generation. It is expected that at least 100,000 of the trees will be planted by children, volunteers and cadets. £8m has been raised of the £20m target to pay for the project, so we still need people to help.

The Trust has also now secured the final piece of the jigsaw to create four Centenary Woods in each country of the UK with the news today also that the charity has acquired the perfect site at Ffos Las in Wales to go with the sites already secured in England, Scotland and Northern Ireland.

The opportunity now is to involve the local community to plan and create the new wood in Wales, and to raise the remaining £100,000 which is still needed to fully fund the Welsh acquisition.

The Woodland Trust aims to plant millions of trees over the next 4 years across the UK, one the most ambitious woodland creation programmes in the history of the Trust, to say a huge ‘thank you’ to those who lived and died  during the First World War.

Beccy Speight, Woodland Trust Chief Executive, said: “We still need the funds to pay for all the sites but we are well on our way to creating 4 beautiful, growing focal points in England, Northern Ireland, Scotland and Wales by 2018, as well as having planted millions more trees and helped to create hundreds of woods, to give thanks to all those who sacrificed so much.

“All those who made sacrifices in the First World War did so in the hope of securing a brighter future for the next generation. In this centenary year, we can’t think of a better way to give thanks for this than creating thousands of acres of life-giving native woodland, as a legacy for the whole country.”

The new woods will create habitats for wildlife to thrive, for people and children to enjoy, will improve communities and will contribute to a healthier planet.