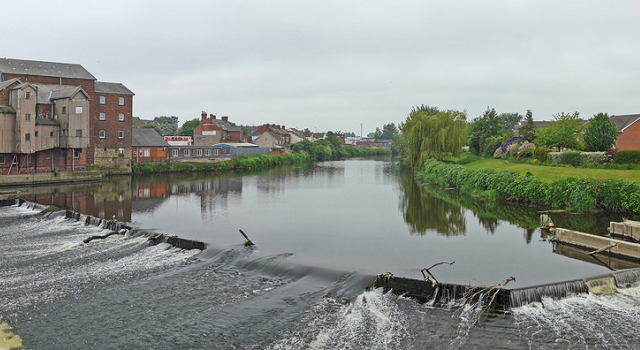 The first of 450 trees in a £500,000 natural flood management pilot scheme on the River Aire have been planted to reduce flood risk.

The first of thousands of trees to be planted across the upper River Aire catchment took place today as part of a pilot natural flood management project.

Cllr Judith Blake CBE, leader of Leeds City Council, planted the first tree on site at Eshton Beck, Gargrave, witnessed by volunteers, landowners, local authorities and partners. This pilot site will have 450 trees planted, to see how natural techniques can slow the flow of water and reduce the risk of flooding downstream.

Ray Bridge Farm, Eshton Beck, Gargrave is the location of the first pilot site where trees such as Dogwood, Guelder Rose, Downy Birch, Alder, and willow will be planted along with hedgerows of hawthorn, blackthorn and hazel. Yorkshire Wildlife Trust staff and volunteers will be leading the planting of trees at the site.

The natural flood management pilot forms part of the Leeds Flood Alleviation Scheme, led by Leeds City Council in partnership with the Environment Agency, which has a catchment wide approach to flood risk as it enters its second stage.

This £500,000 pilot programme, which has been funded by Leeds City Council, forms part of plans to plant hundreds of thousands of trees that will support second phase of the Leeds Flood Alleviation Scheme.

Working with natural processes to reduce flood risk, known as natural flood management, is an important part of managing and reducing flood risk in a sustainable way alongside more traditional engineering solutions. The interventions will also create habitat for wildlife and help regenerate rural and urban areas through tourism.

The pilot sites will allow the team to be able to do monitoring and research of the techniques used to gather evidence and increase their understanding and the benefits they give to reducing flood risk. The pilot programme will also be used by the Environment Agency and Leeds City Council to develop a co-design approach to working with landowners, tenants, local authorities and other key partners such as the Aire Rivers Trust and the White Rose Forest. This will help to then develop future plans for the catchment.

Leader of Leeds City Council Councillor Judith Blake said: “These new trees are a hugely significant part of our plans to protect Leeds from future flooding like the devastation we saw on Boxing Day 2015.

“It’s great to be working with partner authorities along the River Aire to get the first of the trees planted.

“They are part of what will be a range of natural flood management measures in a catchment wide approach to prevent future catastrophic floods affecting communities along the river.”

“While we can never truly eliminate the threat of flooding, working together across local authority boundaries to develop and deliver this programme will help us to create better, more effective solutions to a catchment-wide challenge.”

Following the successful opening of the £50million first phase of the scheme serving the city centre, Holbeck and Woodlesford in October last year, phase two identifies measures further upstream including the Kirkstall corridor which was badly hit by the 2015 Christmas floods. It also looks at areas beyond the city boundary to further reduce the possibility of the river flooding in Leeds, as well as additional measures to offer protection for the South Bank area of the city centre which is a key future economic driver for Leeds.

The phase two plans have a strong focus on natural flood management, with proposals to create new woodland areas which would more than double canopy coverage in the River Aire catchment. It also proposes water storage areas to be created and developed, operated by control gates system meaning water can be held and then released back into the river when safe to do so. A third element would be the removal of existing obstructions along the river to help reduce water levels, along with lowering the riverbed in places to improve its capacity and flow.

An outline business case for phase 2 has been completed, which was submitted at the end of January 2018. Outline design for engineered options is being progressed, which will be followed by a tender process with an aim to awarding the construction contract award in autumn 2018.