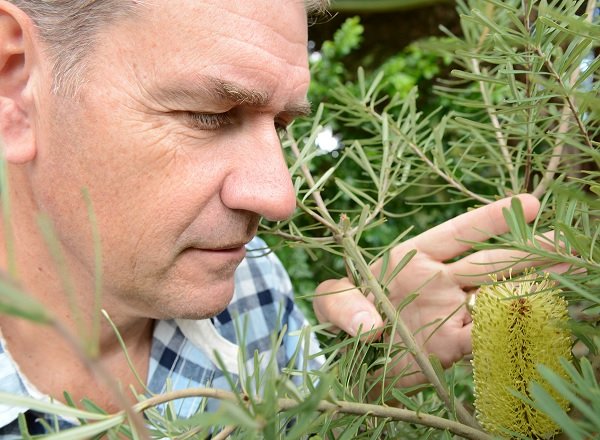 A world-leading botanic garden is celebrating after recording the first UK outdoor flowering of a hard to propagate tree from the other side of the world.

Botanists from Wakehurst (Kew’s country garden in West Sussex) ventured to south-west Tasmania with colleagues from Kew’s Millennium Seed Bank and other agencies  Working in collaboration with the Tasmanian Botanic Garden, seeds from all the plants they encountered were collected and are now safely stored both in Tasmania and in the vaults at the Millennium Seed Bank. The team’s fieldwork allowed horticulturalists at Wakehurst to grow rare and unusual shrubs and trees from these cold rain forests, including Banksia marginata. Seed was collected from a single 5metre tall tree near Scotts Peak Dam in the South Western National Park, a wilderness area almost inaccessible to visitors.

Banksia marginata, known as the silver banksia or honeysuckle in Australia, is a large shrub or small tree from south east Australia and Tasmania. Banksia is a member of the Protea family, which is key to telling the story of the Southern Hemisphere continents. It shows how a single plant family was separated by continental drift. Species developed in isolation in each part of the Southern Hemisphere to give rise to many unusual and attractive plants, including Protea in South Africa and Banksia in Australia.

“Over the last two years we have planted several young specimens of Banksia marginata in the gardens near the Mansion to increase our collection of Southern Hemisphere plants”, explains Wakehurst Garden Manager Dr Chris Clennett. “We believe this is the first time this species has flowered outside in Great Britain. It’s a tremendous achievement by the whole team to have these exciting plants flowering in the gardens. We may have a long way to go before they reach the size of their parent tree, but we have planted in our most protected places to give them a fighting chance. To have this many flowers so quickly shows how happy the plants are already, so I look forward to seeing them grow and flower each year.”

The plants are on view to visitors to the 600-acre estate which has been administered by the Royal Botanic Gardens, Kew for the past forty-nine years. The gardens open daily from 10am. Details from www.kew.org/wakehurst or by calling 01444 894066.