First of 12,000 trees to be planted in Plymouth’s new city park 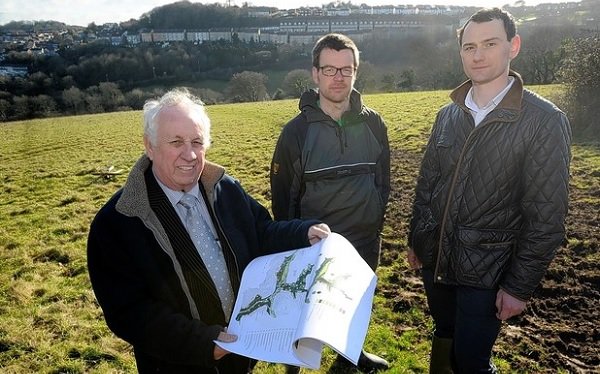 The first of 12,000 trees will be planted in the city’s new country park on Valentines Day, with Plymouth City Council and Environmental Agency inviting people to join in on the planting.

It’s the first wave of projects headed up by Plymouth City Council (PCC) and Plymouth Environmental Action which will see a flourishing green space created at the Derriford-planned 100-acre country park.

The green space creation was part of the planning permission conditions fixed after more than 800 homes and a school were approved in the area of Seaton.

The trees to be planted at Poole Farm will go into the ground in the form of hedgerows, as the city’s new country park starts to take shape.

Plymouth Environmental Action have spent the winter months removing old fences, brambles and other scrub species ready for the hedgerows to be planted this weekend.

Plans for a park have been in the pipeline since 2008 when local people were asked what they would like to see within the proposed park.

Last year, the Council announced that it would build an environmental education hub in the park, with Duchy College to run it as a rural centre of learning for around 400 students.

As well as running Poole Farm, the hub will have a campus offering courses including horticulture, countryside management and animal care.

The partnership will also offer evening and weekend courses with the community in mind, including hedge laying, butter-making, bee-keeping, pet care and dog grooming.

Almost two-thirds of tradesmen agreed that rogue traders are a problem within the industry. How do you spot the so-called ‘cowboys’ among the heroes? Here are the key things to look out for.

Other plans include over 15 kilometres of new footpaths and cycle routes; new habitats, community garden and orchard for growing food for the farm shop and café.

The Council has also started work with Duchy College to bring in a small herd of cattle to graze on the grassland.

In the next few weeks a new apprentice farm manager will be employed in time to see cattle move onto site, as well as beehives installed.

Councillor Brian Vincent, cabinet member for Streetscene said: “We want to spread the love to nature and wildlife by helping to plant a new hedgerow.

“These trees will play a crucial role in helping the city’s environment, capturing more rainfall and creating oxygen as well as becoming habitats for our wildlife.”

Derriford has been earmarked as one of the main growth areas for Plymouth with a new district centre, housing and employment proposed to be built over the next twenty years.

If you would like to muck in with planting this weekend, there will be a mini bus picking up volunteers at Bretonside Bus station at 9.30am on Sunday 14th February.

Tools, refreshments and toilet and hand washing facilities are provided; all you need to bring is yourself, suitable clothing to work outside and a packed lunch.
source