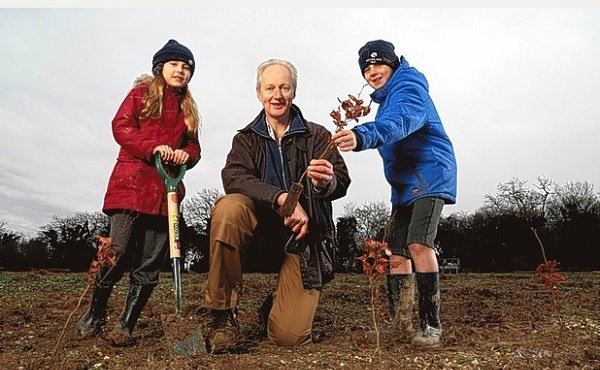 The first of more than 200,000 trees have been planted at a site near Headley Court to commemorate the centenary of the start of the First World War.

Conservation charity The Woodland Trust announced in March that it had chosen Langley Vale as the site for its flagship Centenary Wood.

On December 12, schoolchildren and volunteers got stuck in with planting at the site, which will allow the public to plant trees dedicated to fallen family members.

The first tree was planted by David Appleton, from Suffolk, who was chosen in honour of his four great-uncles – George, Charles, Henry and Francis James – who were all killed in action in 1915 and 1916.

Mr Appleton said: “I think the new Centenary Wood is as fitting a means of commemoration as can be imagined: practical, beneficial and long-term sustainable.

“A wood is the polar opposite of war – a beautiful, peaceful oasis of calm and life which throws into sharp contrast all that war brings.”

The 640-acre site at Headley is one of four new woods to be created by the trust across the country to mark the 100th anniversary of the outbreak of the Great War.

As well as more than 200,000 trees, the Trust will create avenues of trees, fields of poppies and other features.

So far £8million has been raised towards the £20million target to pay for the project, with the trust asking as many people as possible to donate to the cause.

Woodland Trust chief executive Beccy Speight said: “We still need the funds to pay for all the sites, but we are well on our way to creating four beautiful, growing focal points in England, Northern Ireland, Scotland and Wales by 2018.

“All those who made sacrifices in the First World War did so in the hope of securing a brighter future for the next generation.

“In this centenary year, we can’t think of a better way to give thanks for this than creating thousands of acres of life-giving native woodland, as a legacy for the whole country.”

Trust director Karl Mitchell said the site would add to the area’s close association with the Armed Forces, with the Defence Medical Rehabilitation Centre situated at nearby Headley Court.

In addition to the 1,000 acres of woodland created at the four sites, more than 3million trees will be given to schools, community groups and youth groups for planting.