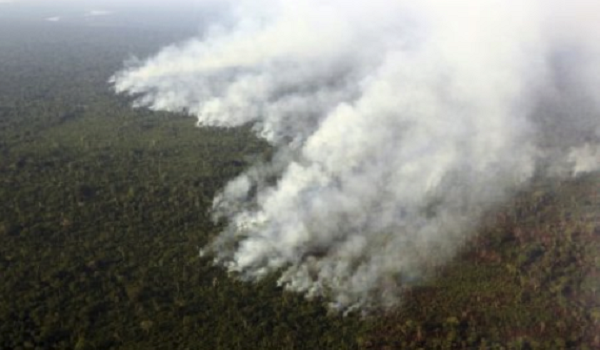 Intentionally starting forest fires to make way for farms from the Amazon to the Congo basin caused a loss of global tree cover amounting to an area almost the size of Italy in 2017, an independent forest monitoring network said.

“Tropical forests were lost at a rate equivalent to 40 football fields per minute” in 2017, Frances Seymour, of the WRI, told a news conference before a June 27-28 meeting of 500 experts in Oslo on slowing deforestation.

Brazil, Democratic Republic of Congo, Indonesia, Madagascar and Malaysia suffered the biggest losses in 2017, it said, based on satellite data. The study omits, however, how far tree plantings or new growth offset the losses.

“Vast areas continue to be cleared for soy, beef, palm oil and other globally traded commodities. Much of this clearing is illegal,” Seymour said. “We are trying to put out a housefire with a teaspoon,” she said of global efforts to protect forests.

Brazil alone lost 45,000 sq km of tree cover, down 16 percent from a record in 2016. Fires raged in the southern Amazon region of Brazil, many of them set to clear land for agriculture, the study said.

Many nations are trying to plant more forests to achieve goals under the 200-nation Paris climate agreement in 2015 to limit a rise in temperatures. Trees soak up carbon dioxide from the atmosphere as they grow.

Tree cover, however, is just one measure of the state of the world’s forests.

Among differences, the FAO says that a forest where trees are deliberately felled to make way for new plantings is still a forest. Global Forest Watch registers the felling as tree cover loss.

Anssi Pekkarinen, a senior forestry officer of the FAO, said that the FAO method of identifying the underlying land use “gives a much more comprehensive picture on the world’s forests.”