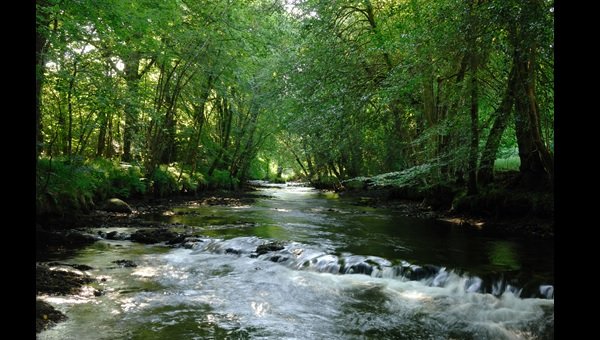 The Woodland Trust and National Trust have reached the £3.8m fundraising target which means the entire 825 acre Fingle Woods in Devon is now fully in their care. The two charities are officially marking the full acquisition of the site with a public open day on Friday 4 July.

The final piece of the funding puzzle was provided by a grant of £845,000 from Viridor Credits Environmental Company, via the Landfill Communities Fund, which enabled the charities to purchase the outstanding piece of land within Fingle Woods which had yet to be secured. To mark the milestone both the Woodland Trust and National Trust Chief Executives will take part in a symbolic partnership agreement signing on the day.

The two charities need to raise a further £1.2 million which will allow them to carry out much needed restoration work on site over coming years, which will improve the woodland habitats and encourage a greater variety of wildlife to make their homes within Fingle Woods.

Beccy Speight, Woodland Trust Chief Executive, said: “This is a landmark project between two of the country’s leading conservation organisations and we’ve received fantastic support to make the purchase of Fingle Woods a reality.

“There is still a long way to go restoring the woods so we need further financial support, but in the meantime we’d encourage people to come and see the site for themselves and be inspired!”

Helen Ghosh, Director General of the National Trust, added: “This is the first time that the National Trust has formed a land management partnership with the Woodland Trust. We firmly believe that forming such partnerships in the future and working on a landscape scale is the essential thing for us to do if we are to stem the decline in biodiversity in this country.”

The charities are marking the milestone with a public open day, giving visitors the chance to explore the site in a Land Rover, take part in bushcraft activity, build dormouse boxes and see heavy horses at work. People will also learn more about the charities’ plans for Fingle Woods, including the restoration work and opportunities for volunteering.

Gareth Williams, Viridor Credits Acting General Manager, said: “Fingle Woods represents an exciting opportunity to not only save one of a few precious scraps of ancient woodland, but also to engage with the community to demonstrate why it is so important to protect this important habitat.”

The remaining funding is needed to restore the two-thirds of Fingle Woods which is covered by conifers but has ancient woodland species laying dormant underneath. By gradually thinning the conifers over many decades, light levels reaching the forest floor will increase allowing native woodland to regenerate, benefitting species such as the pied flycatcher, redstart, wood warbler and fritillary butterflies.

Damaged ancient woodland makes up nearly half of the existing ancient woodland left in the UK, which is irreplaceable and covers just 2% of the landscape, restoration is the only way to improve its long-term future.

The charities have also received funding support from the Heritage Lottery Fund, Esmée Fairbairn Foundation, Garfield Weston Foundation, a number of charitable trusts and individual donors. Find out more about the charities’ plans at woodlandtrust.org.uk/fingle-woods