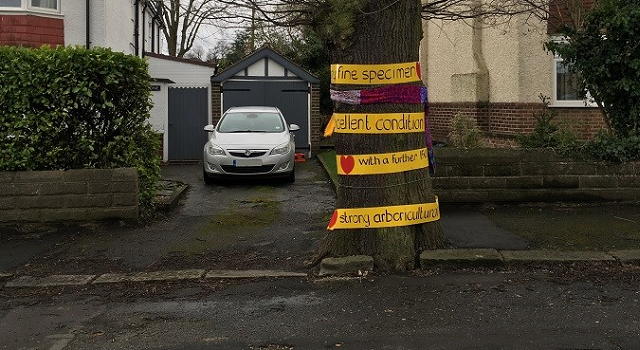 Sheffield City Council’s announcement it is to pause felling of street trees is timely after the Woodland Trust and Trees for Cities presented evidence to the council questioning its tree felling assessments.

Three weeks after submitting an independent report, Sheffield City Council (SCC) has yet to respond to Trees for Cities’ and the Woodland Trust’s offer to fund a more cost effective and appropriate solution to save the Vernon Oak, leaving the future of the tree uncertain.

During the long running debate over the future of the Vernon Oak, one of the most iconic trees in Sheffield, residents and organisations have repeatedly argued that there is no need for such exaggerated measures as suggested by Sheffield City Council  to tackle the supposed conflict between this 150-year-old oak tree, and the highway and footpath constructed around it.

In late 2017, Trees for Cities, working with the Woodland Trust, made the bold offer to find funding for an alternative solution – one that would see the tree retained and resolve the conflicts suggested by SCC. Retention, we were told, would require funding in the region of £10,000 which subsequent investigations have proved to be a gross overestimation.  A report commissioned by the charities also put forward cases where such issues were shown not to pose a significant threat to public safety and could be managed in much more measured ways. Since then, both charities have been waiting for a response from SCC, but the council has yet to agree or dismiss the charities’ solution.

David Elliott, CEO of Trees for Cities said: “We have contacted Sheffield City Council with a measured and cost effective solution to save the Vernon Oak, but it remains to be seen whether they will take the recommendations on board and act on evidence put forward by a highly regarded and experienced independent highways consultant. We urge the council to act reasonably, and preserve this tree, and the city’s reputation as one of the greenest in Europe.”

Beccy Speight, CEO, Woodland Trust said: “A legitimate solution has been put forward at no cost to the council other than its pride.  Passions are running high on all sides but decisions must be based on fact.  An independent assessment concludes that the Vernon Oak does not need to be felled, and counters claims that to retain it would cost £10,000 showing Sheffield City Council’s estimate is enormously over inflated.

“This also casts doubt on decisions made for other healthy trees that face the axe as part of the Amey contract. We echo Trees for Cities calls for a measured response and once again offer our support  to help broker solutions and find a better way forward.”