Felling of Poltair trees is a ‘complete mess’ 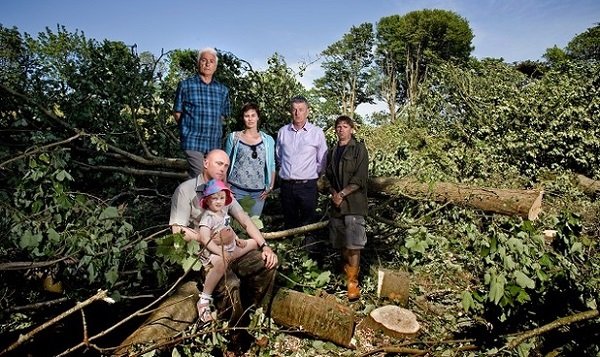 The chairman of the development company responsible for felling of dozens of mature British trees over the bank holiday weekend has defended the action in the face of the anger of hundreds of local residents.

The trees – including mature beech, sycamore, elm, ash and oak – covered an area more than half the size of a football pitch at the former Poltair Hospital and the devastation has caused shock and outrage among residents in Heamoor and Madron.

The area is used by many local people and the felling of the trees on Saturday, and again on Monday, provoked an instant reaction from both residents and local councillors. There was concern too at the harm done to wildlife which includes rooks, jays, buzzards, bats, owls, squirrels, woodpeckers and foxes as well as many other common birds.

However James Ambo, chairman of the Bea-hegia Organisation which bought the site at auction at the end of March, said the work had been carried out responsibly.

“We have made contact with all relevant authorties,” he said. “We have written confirmation from Cornwall Council confirming the absence and non-existence of both tree preservation orders and tree tagging to all of the trees within the private garden of Poltair Manor.”In order to obtain better light together with good management, these works have been carried out.

“The Ambo Group is an organisation dedicated to providing sustainable homes for rent or purchase for the young generation and future generations of Kernow.”

Hannah Dash, who has lived in Heamoor all her life and walks her dogs in the woods almost daily, set up the Poltair Woods Facebook page which has been ‘liked’ by more than 600 people, and contacted Heamoor Cornwall councillor Mario Fonk (although Poltair is just outside his ward boundary, Councillor Bill Maddern is currently unwell).

Together, and with the help of fellow Cornwall councillor Jim McKenna, they have lobbied Cornwall Council into placing an immediate Tree Preservation Order to protect the remainder of the trees.

Mr Fonk said that the destruction of the woodland was “scandalous”.

“The village is in uproar,” he said. “More than 150 people went to the site to complain – there was no notification or prior warning that the trees were going to be cut – it came completely out of the blue.

“The area is in private land, but the woodland has been enjoyed by many generations.”

Mrs Dash, who has also contacted the Cornwall Wildlife Trust, the Forestry Commission and the police about the damage, said she was “very angry and upset”.

“When it was owned by the NHS, I was very lucky to be able to use the woods as a playground when I was a child and now for walking my dogs,” she said.

“I realised that things might change with a new owner but from a nature point of view, to have no prior warning of this destruction is disgraceful.”

Mr McKenna said: “Having visited the site with Mario (Fonk) and local residents, it is a complete mess. Those responsible seem to have had no regard for the environment or indeed the extent of their ownership as it appears they may have cut down some trees outside their boundaries on land owned by the Bolitho Estate.”

On Tuesday afternoon, police went to Poltair. “We received calls regarding the location and the fact that the trees had been cut down,” said Penzance Inspector Jean Phillips.

“At this stage we are identifying whether the appropriate licences have been sought by the contractors to do the works and advise that all work stop while this is carried out.”

As a result of the visit, Mr Fonk has asked Cornwall Council to put up barriers notices informing people that no further work is to be done on the site.

A spokesman at the Forestry Commission said they would be investigating whether there has been a breach of forestry regulations. The Forestry Act permits land owners to fell up to five cubic metres of timber on their property in a calendar quarter. Anyone wanting to fell more than that must obtain a felling licence from the Forestry Commission.

Also in the area are woods owned by the Bolitho Estate but the estate office has confirmed there is no intention to cut down any of their trees.