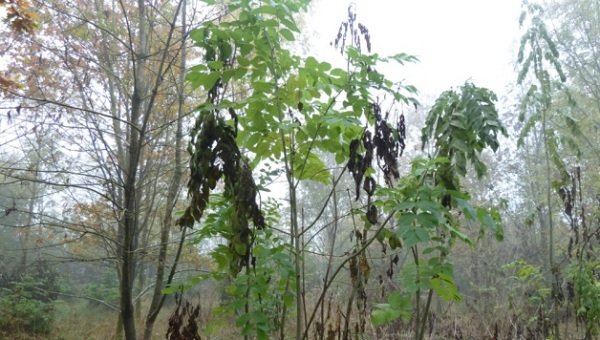 There is particular concern for Sussex which is a stronghold for the native tree.

Almost 1,000 sites across the UK have now been affected by the disease, which was first detected in 2012.

Government Ministers are now focusing on slowing the spread of the disease and developing varieties of ash tree that are resistant to the fungus.

Experts now believe ash dieback, which is known as Chalara, is unstoppable and will ultimately spread across the entire country.

The disease will wipe out the natural habitats hundreds of animals and birds, including wood mice, wrens, bats, bullfinches and beetles.

New figures from the Department for Environment, Food and Rural Affairs (Defra) show the number of infected sites in the UK had risen from 323 at end of 2012 to 949 at the end of 2014.

Environment Secretary Elizabeth Truss has said: “We are doing all we can on ash dieback. It is a serious issue. We’re looking at various ways of dealing with it but we don’t have a magic bullet. We don’t have a solution and we’re still carrying out research on that.”

Restrictions on the movement of ash plants were introduced in 2012.

A Defra spokesman said: “Our aim is to ensure that the graceful ash tree continues to have a place in our forests. To help combat Chalara this Government has committed over £16.5 million into tree health research which includes identifying a strain of ash tree which is naturally resistant to the disease.”

The disease causes leaves to blacken and branches die.

“Almost all of our ash trees could be affected,” he said. “Some will die quickly, some will battle the fungus for a decade or more and hopefully a few will be resistant or at least partly resistant. The spread is inexorable and the whole country will be affected.”