Fears for city elms after tree felled in the Pavilion Gardens 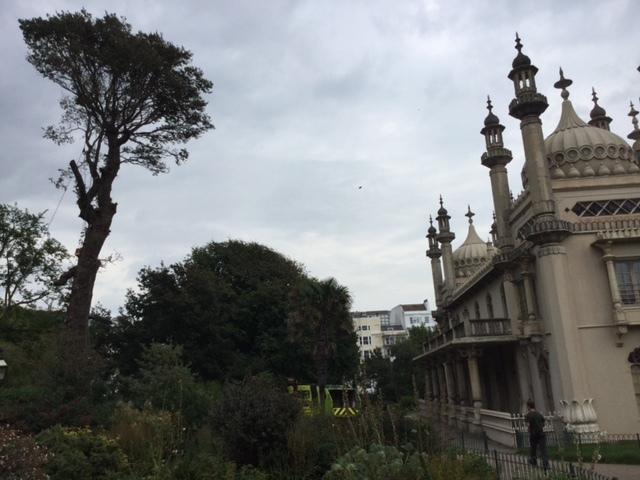 There are fears for the city’s elms after a 270-year-old tree in the Pavilion Gardens became infected.

The tree, which predates the Prince Regent’s pleasure palace, was felled on Monday after Dutch elm disease took hold of its roots.

It is feared that the disease has spread to other trees in the gardens, with at least one other elm thought to be infected.

Brighton and Hove is home to the last remaining elm trees in the country after the crippling Dutch elm disease wiped out thousands in the 1970s.

There are thought to be more than 17,000 across the city, which now form the national collection of the species.

“This one contracted the disease in 2007 and 2008. The guys managed to save the tree. Last year it was infected and the prune-out was successful.

“With the extreme temperatures where trees are transpiring very rapidly it has obviously pumped the toxins produced by the disease through its water conducting tissue all around the tree.”

He warned there was another remarkable tree that could be under threat, adding “It is possible the other one is at risk but fingers crossed that doesn’t happen.”

Mr Greenland, who retired in 2013 and now lives in Worthing, said the disease history of the tragic tree would indicate there could be one infection source.

He also said the tiny bark beetles responsible, which can fly albeit not terribly well, might have carried the infection from another area.

The council has issued a warning, with fears the disease has been spread by the beetles breeding in elm logs.

A spokeswoman said: “The tree in the Royal Pavilion Garden has probably become infected by beetles breeding on elm logs or furniture (with bark attached) stored nearby.

“If members of the public have firewood or other timber, or an elm tree that may be dead or dying, which they would like to be checked they can contact the arboricultural team on 01273 292929, or through the council’s website at www.brighton-hove.gov.uk/elms for a free inspection.”

She added that the council funds a campaign to contain the spread of the disease in the city, primarily by felling elm trees as soon as they become infected.