Farmer, 62, is fined more than £100,000 for chopping down 200 ancient beech trees in revenge attack on energy firm 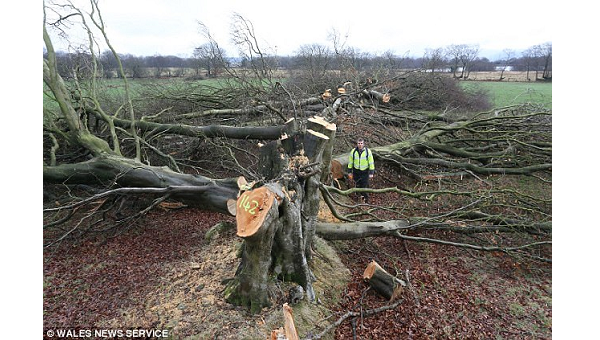 A farmer with an axe to grind has been fined more than £100,000 for chopping down 200 ancient beech trees in a revenge attack.

Keith Smith, 62, carried out a chainsaw massacre on the 200-year-old hedgerow beeches in protest at a new solar energy plant.

A court heard Smith had rented the farmland and woods in Blackwood, near Caerphilly, South Wales, and wanted to launch a business there.

But the land was bought up by an energy company to install solar panels to generate electricity – and Smith objected to the plans.

So Smith and his two sons took their chainsaws to the land to cut down the trees.

Muhammed Yaqub, prosecuting, said: “The land was being used to install solar panels and the company in fact wanted the trees in place as they provided the perfect screening for the panels.

“Smith had applied to do something on the land and failed to get permission. When the solar company put their own plans in for the solar panels, he objected.

“He wasn’t able to do what he wanted, and this was a revenge. His attitude was: ‘If I can’t have that land, no one else can.”

Newport Magistrates’ Court heard Smith tell investigators he was given permission by solar power company Gildemeister to cut down the trees – but this was a lie.

Mr Yaqub said: “There was no evidence that he was given permission to chop the trees down.

“The land was being used to install solar panels and the company in fact wanted the trees in place as they provided the perfect screening for the panels.”

Smith, of Ammanford, Carmarthenshire, failed to turn up for the hearing at Newport Magistrates Court.

The court heard if the trees were to be sold as fire wood they would be worth around £52,500.

Speaking after the sentence, Jim Hepburn, Regulatory Woodland Officer at Natural Resources Wales, said: “This is a devastating case which will have a terrible impact on the local environment and no doubt be very upsetting for local people.

“These trees would have been around 150 – 200 years old and would have provided valuable habitat for wildlife.

“We continue to investigate how this felling has happening, and will take the necessary action against those responsible.”