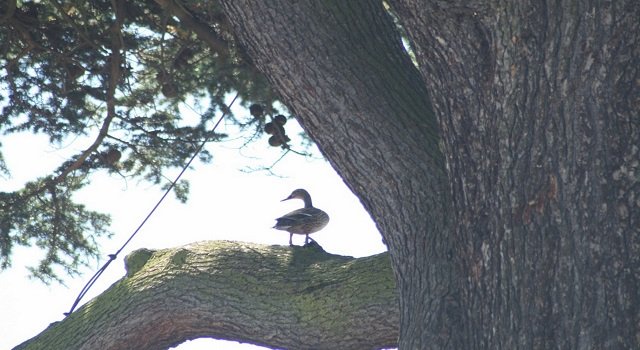 A family of ducks attempted to thwart the council’s removal of a 200-year-old cedar tree in Thames Ditton this week.

After a battle over whether to cut down the tree, with some residents wanting it to stay and others agreeing with Surrey Country Council that it was a health and safety hazard, work on the tree on the corner of Queen’s Drive and King’s Drive began on Monday (June 9).

But the next day, after the lower branches were removed, a family of ducks was found in the tree and work had to stop.

Fran Strachan, a resident of Queen’s Drive, said: “Some people think it is a danger but it is a beautiful tree.”

She said that the person whose house it was directly outside was worried about it falling on their home, especially after some branches fell in recent storms.

A county council spokesman said: “This is a huge mature cedar tree and we have been trying to prolong its life over the years with the help of bolts, cables and braces. Unfortunately, earlier this year a large heavy limb fell from the tree, not injuring anybody but requiring us to take action. We looked into a number of possibilities but the only way to guarantee safety was to fell the tree.”

Although the ducks only temporarily halted the work, Ms Strachan said: “No human protestor has been able to stop the felling of the tree but a duck has got a nest up there. This lone duck was able to stop what humans could not.”

‘Sheltering from the sun’

On Tuesday morning, when the ducks were first found, she said: “The duck is quacking away, she sounds very distressed.”

Ms Strachan described seeing a nest at the top of the tree with an egg, presumed dead, left in it after the mother flew away.

However, the council spokesman denied that a nest was found in the tree, suggesting instead that the ducks were simply sheltering from the sun.

He said: “Just after our contractors started work, they reported a duck in the tree and two ducklings on the ground underneath, but no nest. There was nothing to suggest the birds had fallen from the tree. The mother duck took fright at the tree fellers and flew away, leaving the ducklings.

“Wildlife Aid advised that if she did not return it would be best to take the ducklings to their centre. However, we were reluctant to part the babies from their mother so we just moved them away from the work so that they would be safe, and we are delighted to say they were not there on Wednesday morning so presumably their mum came and collected them.”

Ms Strachan helped in the rescue effort, adding: “As mum kept flying to the river to look for her babies, we decided to take the ducklings to the river and leave them for her to find and, thankfully, this worked, much to everyone’s relief.

“One of the most beautiful sounds in the world is the change in tone of a mummy duck from despair and anguish to delight and extreme happiness.”

Ms Strachan was impressed by the way the contractors dealt with the situation.

She said: “They were so gentle and caring towards the ducklings and genuinely cared for their welfare.”