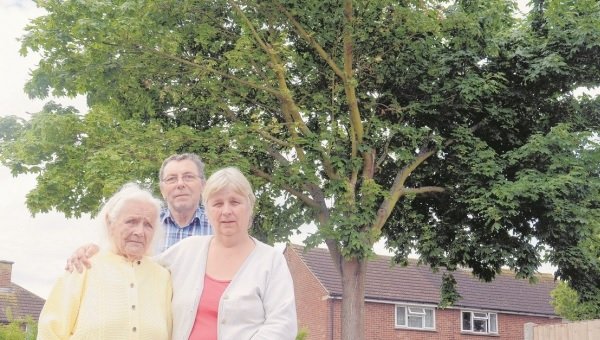 THE family of an 89-year-old widow locked in a battle with the council over the removal of a tree threatening to destroy her home have said the problem is now ‘unbearable’.

A 35ft-tall tree has uprooted the life of Hilda Wheaton, of The Normans, Wexham – with the maple causing cracks in her driveway and in the wall of her home.

Her family fear its roots may now be growing under the house and have spoken out of their mother’s anguish.

Joan Crick, Mrs Wheaton’s daughter, said: “It has been a problem for nine years and has become unbearable for my mum to manage since my father died.

“Not only are there all the leaves to clear, but the roots are coming under the patio and are causing cracks in the wall and path out the front. It’s not fair on my mum and it’s not safe: she could fall over.”

Their campaign has the backing of ward Cllr Paul Sohal, who added: “We have made some improvements and we had the footpath resurfaced and the tree was trimmed last year, but it continues to be a problem and has caused more damage.

“Mr Wheaton worked hard in his back garden and front garden to make it look nice and he was never idle. Of course it is the responsibility of residents as well, but especially when they are elderly, the council needs to do something.”

However Hilda’s husband died five years ago, before whice he had contacted the council numerous times and was told the tree was planted in the wrong place, according to the family.

Slough Borough Council denied this. A spokesman added: “It is quite common for tree roots to grow past private boundary lines in urban areas such as Slough and we do not usually remove roots or branches. Property owners are entitled to cut back overhanging branches or invasive roots up to their boundary line.”

After they were contacted for comment by The Observer, they said they will be sending out inspectors to look at the tree.