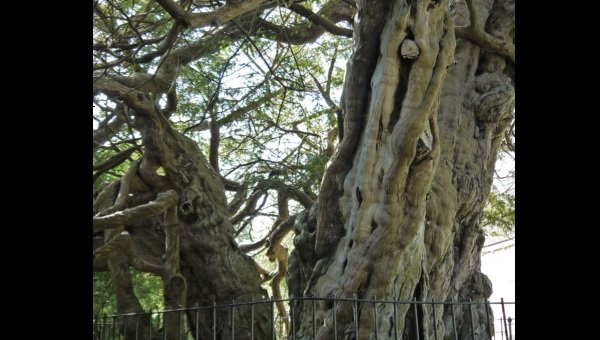 Following the success of Julian’s first book, Britain’s Tree Story for the National Trust in 2011, Julian travelled extensively to photograph and gather stories of 100 magnificent, trees – many more than 1,000 years old, in 40 countries around the world.

“The result is a celebration of ancient trees through words and pictures, along with their history, legend and mythology, presenting an extraordinary record of the rich variety of ancient trees surviving worldwide,” he said.

The book features a true 1066 gem, the wonderful Crowhurst Yew – an ancient hollow Yew tree, thought to be around 2,000 years old, situated on King Harold’s manor, which Julian says was quite possibly known to him before his demise at Hastings.

With his latest literary offering Julian chose to self-publish, part-funded by a crowdfunder campaign where the public got involved by pledging to support the book.

He said: “Self-publishing through crowd-funding allows authors to produce beautiful, project driven, independent books. “Hopefully the book will go some way towards raising awareness of ancient trees, providing a record of what we have, and ultimately call for their protection.”