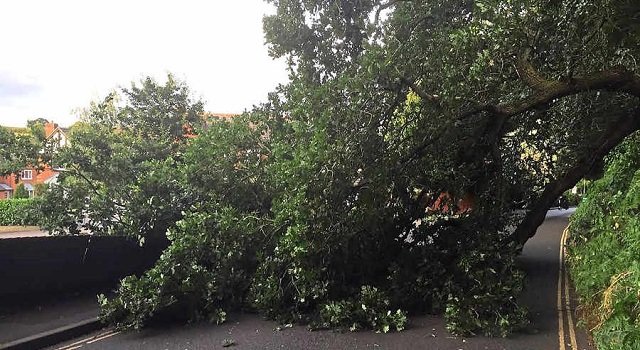 A falling tree has just missed passing pedestrians on a road in Bridgnorth. A councillor has called for action following the incident.

The huge oak tree was blown onto the road, pavement and fence, due to strong winds. Local residents were relieved that no one was injured.

The tree fell blocking Stanley Lane in Bridgnorth just after 7.30pm on August 13, forcing drivers to take diversions around the area.

Councillor Christian Lea, who is the Shropshire councillor for Bridgnorth East and Astley Abbots, has urged the council to take action and carry out a survey for each tree along Stanley Lane between the junctions of Bramble Ridge and Broseley Road.

Councillor Lea said that residents are very worried over the safety of the trees.

He said: “I was naturally very concerned to hear about the oak tree having fallen across Stanley Lane and the fact that it was actually witnessed by people who were walking along the footpath a little further along Stanley Lane.”

“I contacted the arboricultural team at Shropshire Council requesting that they immediately undertake a survey of the trees between the junctions of Bramble Ridge and Broseley Road to allay resident’s safety concerns.”

A nearby resident, of Bramble Ridge, stated his concern about the incident, saying it was a “miracle” that no one was hurt.

He said: “It was a miracle that no-one was actually there at the time. It would have killed them, it really is a massive tree. I had spoken to a lady who said there were children walking just 100 yards away a few minutes earlier.”

The arboriculture officer at Shropshire Council, Dave Woodhouse, was the man who surveyed the trees along the road where the incident took place. He discovered that the trees conditions were varying and recommended work should be carried out.

He said: “It would appear that there were some signs of early decay in the tree that failed, although this would have not been possible to detect from a roadside inspection, given the location of the decay and the external symptoms of the crown/tree stem.

“It is appreciated that this highway has a notable rate of cars and pedestrians, which was evident during my site visit yesterday.

“Hopefully some of the precautionary work, whilst not strictly safety based will help reduce the chance of branch/tree failures on to this road, although I am not sure that there have been noted problems in the past, more general residents’ concerns.

“In the future we will continue to undertake tree safety inspections in line with the council’s tree safety policy to try and manage the risk from trees.”