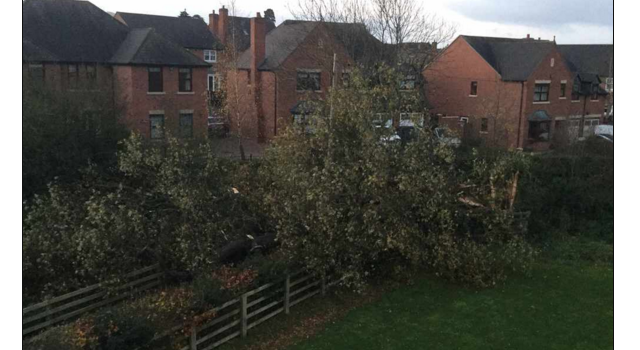 More than 3,000 properties throughout Shropshire were left without electricity after winds of up to 80mph toppled trees, blocking some of the busiest roads and delaying trains in Shropshire & mid-Wales as a second storm swept across the region.

At its peak, more than 3,300 properties were without power. They included the Asda store at Donnington Wood, which had to be closed this afternoon. In the West Midlands, 4,711 properties were hit.

Hundreds of extra Western Power Distribution staff and contractors from the south west and south Wales were brought into Shropshire to help restore power to the county.

Stella Hayward, from the company, said: “We’ve got about 100 extra staff and about the same again of contractors.

“They are all working to try and restore power in the area. They will be working tirelessly until everything is back on.

“There are a lot of little incidents that need to be resolved so it is hard to give a time but power will be coming back on stages throughout the day as soon as we can get it back on.”

Trees were forced down by gusts of wind across the entire area, closing some road and blocking others last night.

Today police were reporting that heavy rain and some strong gusts of wind were continuing to affect travel in the county.

Shropshire Council has tweeted that anyone who knows of any fallen trees should get in contact with them immediately.

Last night a wall collapsed in Shifnal and blocked the A464 towards Wolverhampton.

Newport police tweeted a photo of a section of road sign dislodged by the winds:

Trains between Wolverhampton and Shifnal were delayed by an hour due to a fallen tree. Dave Throup, of the Environment Agency, said:”Gusts over 60mph at Shobdon and Shawbury and 80mph at Lake Vyrnwy. ”

A yellow ‘be aware’ warning for strong winds was issued for parts of Wales, southern, central and eastern England for yesterday afternoon and into the evening.

Jocelyn Lewis who runs T&S Carpet Cleaning was shocked when she woke up this morning to see her trampoline had flown into her neighbour’s garden.

Mrs Lewis, from Wellington said: “I went out into our garden and our 12ft trampoline had flown over a 6ft fence into our neighbour’s garden.

“It was terrible last night, there was a tree down earlier on the lane close to our home.”

Part of a centuries-old willow tree also came down in the playground of Wrekin View Primary School in Wellington.

Steve Johnson, from the school, said: “We’ve lost the majority of the Key Stage two play area where the branch came down on the astroturf so for health and safety we’ve had to keep it out of the way.

“Telford & Wrekin Council should be down shortly to chop it up and clear it away. It was a lovely old Willow Tree.

“Some of the parents have said it is a real shame, but the kids are more worried about the play area.”

Winds were so strong that a huge branch was blown into the garden of 85-year-old Francis Lowe from the other end of his neighbour’s garden.

Mr Lowe said: “The tree is still standing but 99 per cent of it is in my garden.

“It has also taken down two fence panels. It is a mess. I can’t even get out around it.”

This afternoon Wellington police tweeted their thanks to members of the public who helped with the clear-up operation last night:

Last week, Storm Abigail left more than 20,000 homes without power and schools closed in Shetland and the Western Isles as it swept across Britain.

The wind was expected to die down overnight and, while still blustery on Wednesday, was not expected to reach such high speeds.

A fallen tree blocked the A518 between Newport to Gnosall blocking half the road. The A49 was blocked in Ludlow, beltween Rocks Green and Bromfield. Another blocked the A5112 Battlefield Road in Shrewsbury.

A fallen tree on the road from Red House roundabout to Edgmond near Newport was believed to have brought down telephone cables. Engineers from BT were called to the scene.

Fire crews were also called to deal with powers cable in Forge Way, Dorrington, Monkhampton and Ford and Marchamley, near Shrewsbury. A large sign was blown off a building in Leg Way, Oswestry.

In Welshpool, high winds caused trees to topple across the area and roads were also blocked near Roddington and Buildwas in Shropshire due to the weather.

It comes following days of wild weather with wind speeds of 81mph were recorded above Lake Vyrnwy in Powys earlier this week.

Flood warnings – meaning flooding is expected – remain in force on the River Vyrnwy at Melverley and Maesbrook.