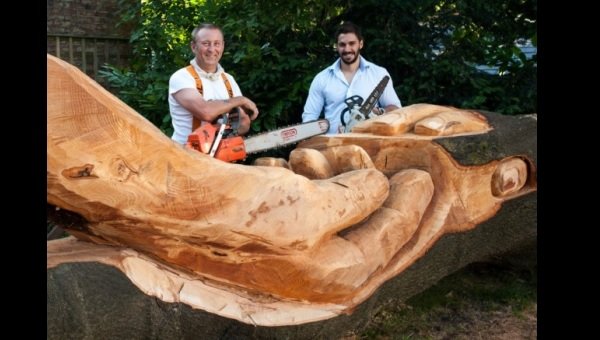 Giant pair of hands made from the fallen tree outside the Earlham Arms. Photo: Bill Smith

A fallen tree at the Earlham Arms pub in Norwich has been carved, through the use of a chainsaw, into a giant pair of hands.

Shaun Gilbert, 48 from South Walsham, used different sizes of chainsaws to create a detailed masterpiece that is attracting a lot of attention.

His work, which began on July, 20, took only four days to complete despite the heavy rainfall.

Landlady Katie Hales, 35, said they were struggling to find a way to remove the tree after it fell because of strong winds earlier this month.

Earlham Arms co-owner Matthew Pamplin with the tree that came down in the high winds. Photo by Simon Finlay.

She explained the tree was so heavy it couldn’t be moved and, because it was beechwood, it could not be used for firewood.

Mr Gilbert, who is in the process of becoming self employed, said: “I hate to see such a beautiful, natural thing purely to warm a house, hopefully for many years to come people will come to see it.”

Landlady Miss Hales said: “I can’t believe he has done it, especially with the chain saw.

“It’s really beautiful, everyone is amazed, you’d think he had hand chiseled it.”

Miss Hales and her partner Matthew Pamplin, both 35, took over the pub last December.

To their horror, as they worked outside in the garden, the tree came crashing down just metres from the pub causing damage to a neighbouring house.

The couple, who narrowly missed the beech tree, also witnessed it break umbrellas and garden furniture.

Now the outlook is looking far more positive owners, Miss Hales’s mother Sue said: “Already it is creating quite an interest from people, it is so different for the area.”

She said she expects people will coming especially to see the tree and perhaps buy a few drinks too.