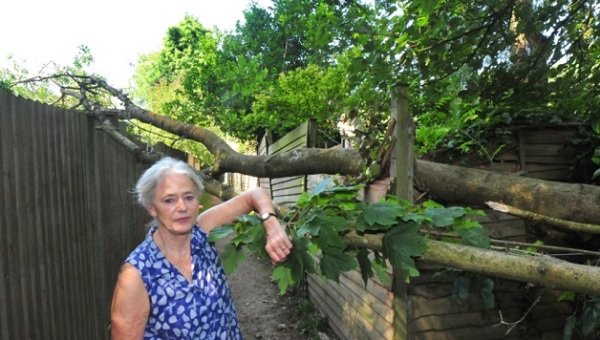 Just days after the Observer contacted Hastings Borough Council about a tree which had smashed into an elderly couple’s fence and was blocking a footpath, it was removed.

Linda and John Corcoran, both in their 70s, say they were furious that despite repeated calls to the council, the fallen tree, situated on council land, had not been cleared since it fell down on July 7.

But much to the relief of John and Linda, who were frustrated that nothing was being done, the tree was removed on Wednesday (July 23).

Linda, 70, said: “I think it is just disgraceful. I think it should have been dealt with and should not have just been left. I feel relieved now it has been removed, but it was just awful and so dangerous for anyone walking down that path. I just hope the council can recompense us for the damage.”

The Observer got involved after the couple’s daughter Karen King contacted the newspaper this week on behalf of her parents as ‘a last hope’ of getting the problem resolved. Karen said: “As a family we are drawing your attention to this matter as we feel that the response from the council lacks urgency. My parents are pensioners and as none of us live close by, we are concerned how much stress this is putting on them and also the vulnerability of their garden and house.”

The council’s arboriculturalist, Chris Wilken, said: “As soon as fallen trees are reported to us, an inspection is made. Trees are then cleared according to priority with danger presented to the public as our main consideration. Our contractors have now cleared the tree in question.”