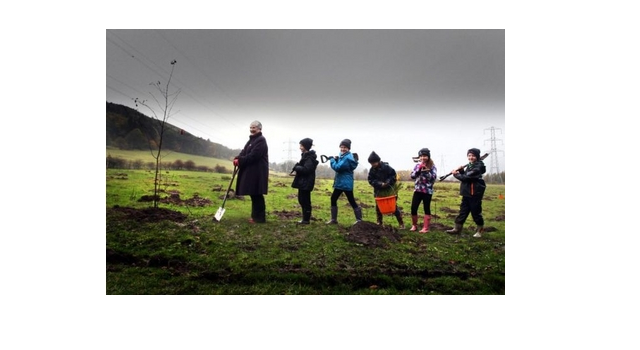 A Woodland Trust supporter, whose grandfather and great-uncle enlisted one after the other and then fell on the same day at the Battle of Ypres, has planted a rowan tree to mark the start of tree planting at Scotland’s First World War Centenary Wood.

Margaret Murison from West Calder, West Lothian, planted one of the first trees to commemorate the memory of her family members who served in the Seaforth Highlanders.

She said yesterday: “My grandfather William Balmer and his brother John enlisted on the same day. Their numbers in the 2nd Battalion, Seaforth Highlanders are consecutive.

“Both died at the Battle of Ypres on April 11, 1917, a date I always remember and always mark. Since my mother died I’m the closest family member to them now, and I feel even closer because of this Woodland Trust project.”

She added: “Planting trees in memory of these fallen heroes is a wonderful idea.

“I’ve always wanted to go and see my grandfather’s grave, but there’s not a very high chance of that now.

A total of 50,000 native trees will be planted at Dreghorn Woods on the Ministry of Defence training estate in the Pentland Hills near Edinburgh, including 10,000 which will be planted by children and members of the public during special planting days.

Children from Currie Primary School on the outskirts of Edinburgh helped plant the first of the trees yesterday.

Carol Evans, director of the Woodland Trust Scotland, said: “The Centenary Woods are a tribute to everyone who helped with the war effort, from those who paid the highest price and their families, to the hardworking men and women off the battlefield.”

The Woodlands Trust and The Herald are hoping readers will dedicate a tree for £20. We will receive 10 per cent of donations to help pay for the cost of this appeal. The remaining 90 per cent of your donation will go to the trust.

To find out more about the project visit: www.woodlandtrust.org.uk/mylocalpaper or call 0800 915 1914.