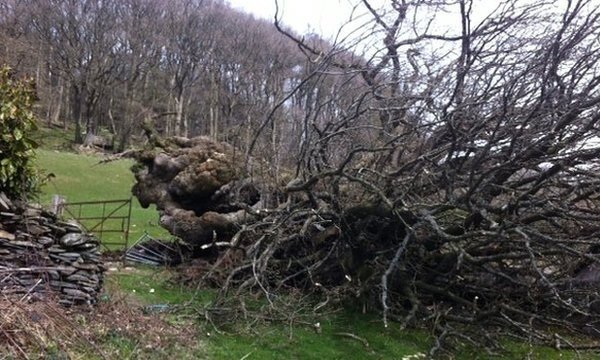 Plans to clone a 1,200-year-old Pontfadog oak tree which was toppled by strong winds a year ago have taken a step forward.

Tree experts have successfully grafted cuttings from the Pontfadog Oak, which was reputed to be one of the UK’s oldest and largest oaks.

The cuttings were taken with the aim of creating a genetic match for the tree, near Chirk, in Wrexham county.

Legend says the tree, which came down on 18 April 2013, was once a meeting point for a medieval Welsh prince.

Owain Gwynedd is said to have met his troops under the tree in the 12th Century before defeating English king Henry II in battle.

Rob McBride, a “tree hunter”, who who finds and records ancient trees, said institutions including the Royal Botanical Gardens Kew and the Crown Estate Windsor had taken the cuttings.

He added that Moray Simpson and Pete Wells from the Ancient Tree Forum (ATF) have now successfully managed to get six cuttings to unite with other oak rootstock.

“Things are looking great as regards keeping going for future generations the gene pool of the Pontfadog Oak,” he said.

Mr McBride said he was working with the tree’s owner and Glyntarian community council to look at raising funds to forge a permanent memorial out of the tree.