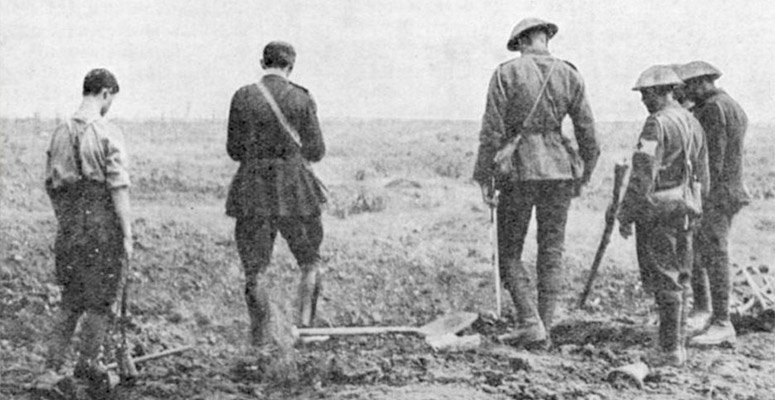 Trees commemorating professional footballers who died in World War One have been planted around England and Wales.

Most of the 92 clubs in the Premier and Football Leagues are participating in the Football Remembers campaign to mark the 100th anniversary of the conflict’s end.

They have been planting groves of trees supplied by the Woodland Trust.

The North West of England has always been a hotbed of football, and the region sent some of its finest players off to fight in the trenches.

Here we remember some of those who served their country and, in many cases, paid the ultimate sacrifice.

Physically imposing on the pitch, goalkeeper Leigh Roose was known for clattering opponents before launching counter-attacks.

He was a colourful character too. When he wasn’t called into action during games, he would joke with supporters, swing from the bar, or even perform gymnastics.

Off the pitch, Roose was equally famous for his antics. He once chartered a train to carry him – and only him – from London Euston to Birmingham so he could play for Stoke City at Aston Villa.

Roose was killed, aged 38, near the end of the Battle of the Somme.

While the exact location and manner of his death remain unclear, what cannot be contested is his bravery.

His regimental history cites: “Private Leigh Roose, who had never visited the trenches before, was in the sap when the flame thrower attack began. He managed to get back along the trench and, though nearly choked with fumes with his clothes burnt, refused to go to the dressing station.

“He continued to throw bombs until his arm gave out, and then, joining the covering party, used his rifle with great effect.”

He was awarded the Military Medal.

Alexander “Sandy” Turnbull was celebrated as one of the top goalscorers of his era.

The 1907-08 season was to prove the most prolific of his career. Scoring 25 goals in 30 games, Turnbull was the catalyst of United’s league triumph – the first of the Red Devils’ 20 top-flight crowns.

The following season his goal helped United win the FA Cup. Soon after, United moved to a new stadium – Old Trafford – where Turnbull scored the first goal in a 4-3 loss to Liverpool.

At the end of the 1914-15 season, though, he was one of seven players found guilty of illegal betting and given a lifetime ban by the FA.

Towards the end of 1915 Turnbull joined the 23rd (Service) Battalion of the Middlesex Regiment, better known as the 2nd Football Battalion.

He took part in the British spring offensive east of Arras that began on 9 April 1917.

He simply disappeared in the fog of war.

While it remains unclear exactly what happened to him, a letter was sent to Turnbull’s wife by a fellow soldier which said that after being wounded “Alec led his men for a mile, playing the game until the last we saw of him. We all loved him, as he was a father to us all”.

There was initial hope that Turnbull may have been taken prisoner, but it was later confirmed that the 32-year-old was officially presumed killed.

He left a widow and five children.

Turnbull has no known grave and is one of the 34,795 names commemorated on the Arras Memorial to the Missing.

Edwin “Eddie” Mosscrop, a winger who won two England caps, combined football with a full-time job as a schoolteacher.

He was a member of both the Clarets’ FA Cup winning side of 1914 and the all-conquering Championship outfit of 1920-21.

A pacifist, he obtained an exemption from military service during World War One after appearing before a Military Service Tribunal in Southport.

Nevertheless, he joined the Royal Army Medical Corps and served in Salonika, northern Greece, rising to the rank of staff-sergeant.

Mosscrop was the last surviving pre-World War I England international when he died in March 1980.

Wilfred Bartrop spent five seasons at Barnsley, winning the FA Cup, before moving to Liverpool in 1914 for a reported fee of £900 – the equivalent of nearly £100,000 today.

The outbreak of war cut short his hugely promising Anfield career after only three games.

After working as a collier, he joined the Royal Field Artillery.

Bartrop arrived in northern France on 13 June 1918 and went into action soon after near the town of Cambrai.

On 7 November his unit was tasked with providing trench mortar support for an infantry attack.

Bartrop and his battery came under heavy fire from enemy artillery.

Unable to find adequate cover, he was severely wounded in the legs and chest.