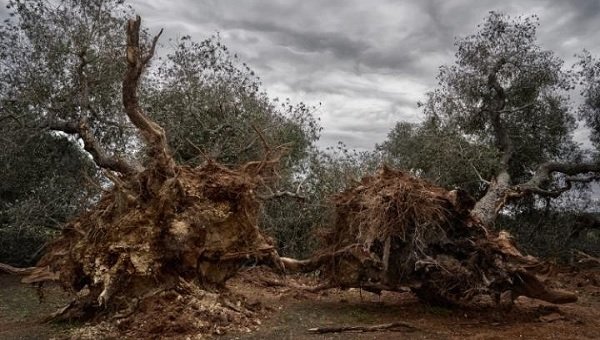 Farmers in southern Italy will be forced to chop down thousands of olive trees which are infected with a deadly disease, the European Court of Justice ruled on Thursday.

The disease, Xylella fastidiosa, was first detected in the southern region of Puglia in 2013 and has led to the death of up to a million olive trees, many of them centuries old.

Italian olive cultivators have resisted calls from Brussels to cut down the trees in order to create a buffer zone and halt the spread of the bacterium, which is transmitted by an insect, the meadow spittlebug.

In Puglia, where an estimated 10 million olive trees give the region a wooded, park-like landscape, they have staged protests and challenged European directives in Italian courts.

Farmers have stood by and wept when their trees were bulldozed and burnt, in an initial phase of destruction which was then temporarily halted by court challenges.

But the court in Luxembourg has now ruled in favour of the European Commission, backing its position that infected trees need to be chopped down and burnt.

Even trees which do not show signs of the disease will have to be removed, if they are within a 100 yard radius of trees known to be infected.

The bug that transmits the disease is believed to have a flight range of 100 yards or less. In its ruling, the European Court of Justice said: “The Commission may require Member States to remove all plants capable of being infected by the Xylella fastidiosa bacterium, even when there are no symptoms of infection, when such plants are in the vicinity of plants already affected by that bacterium.”

The court “confirms the validity” of a directive issued by the European Commission last year which called for trees to be cut down in a bid to halt the advance of the disease.

The Commission’s order was “appropriate and necessary to prevent the spread of the bacterium”, the court said. Politicians and olive producers in Puglia reacted angrily to the court ruling.

“This is the umpteenth attack on our agricultural sector by the EU,” said Elvira Savino, a member of Silvio Berlusconi’s Forza Italia party. “The destruction of healthy trees will lead to devastating economic repercussions and many cultivators will be brought to their knees financially. One of the finest ‘made in Italy’ products is being condemned by European bureaucracy.”

Gianni Cantele, the regional president of Coldiretti, a national farmers’ association, accused the EU of acting like Pontius Pilate, washing its hands of responsibility for paying compensation to olive cultivators, some of whom will face financial ruin.

He called for an urgent meeting with the region’s governor to discuss the “dramatic” ruling. The olive trees of Puglia represented a “priceless heritage” for the region not just in economic terms but also culturally, said Michele Boccardi, a centre-Right politician.

Xylella fastidiosa is “one of the most dangerous plant bacteria worldwide, causing a variety of diseases, with huge economic impact for agriculture,” according to the European Commission.

There are fears that if left unchecked, it could devastate olive groves in the rest of Italy and even spread around the Mediterranean to countries like Spain, Portugal, Greece and Turkey, wiping out millions of pounds worth of olives.

An outbreak of the disease was detected in Corsica in July last year and later on the French mainland, in the region of Provence-Alpes-Cote d’Azur.