Enthusiastic tree planters come from near and far 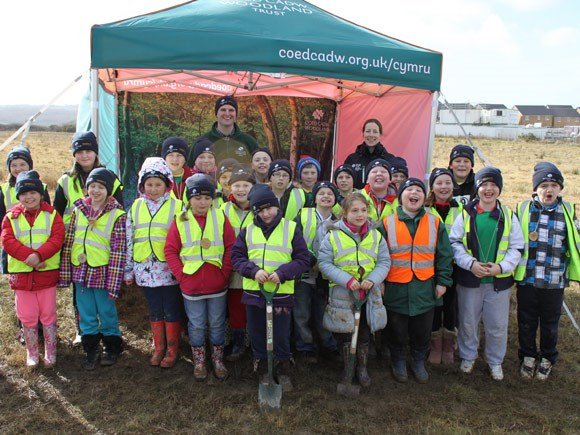 Tree planting at Wales’ new First World War Centenary Wood has now begun. Over last weekend around one thousand native trees were planted, making a great start in creating a new 120 acre Centenary Wood near Kidwelly, in the undulating countryside of Carmarthenshire.

Children from nearby Ysgol Carwe got stuck in on Friday 6 March, along with Woodland Trust volunteer Rob McBride and also staff from Sainsbury’s stores across West Wales.

On Saturday 7 March, everyone was able to join in, and among the enthusiastic tree planters who turned up were Baroness Randerson, Parliamentary Under Secretary of State for Wales, who has a special responsibility for marking the centenary of the First World War in Wales, as well as both the local MP, Nia Griffith, and the local AM Keith Davies.

Baroness Randerson says: “This is an important project both for the environment and to commemorate those who died in the First World War. I was keen to take part from the time I heard about the project last summer, so I’m really pleased the Woodland Trust has raised the £500,000 needed to make it all possible.”

It’s great to see this project started. A lot of people have worked hard to raise the funds we need for it. Our aim now is to involve as many local people as possible in creating the new wood. When it’s finished it will include 90,000 trees, three and a half miles of new footpaths and three miles of new hedgerows, as well as new ponds and wildflower meadows, including iconic Flanders poppy.

The great thing is, everyone can take part in helping create this. You can even dedicate your own tree at the site, perhaps in memory of a member of your family who took part in the First World War.

The creation of a First World War Centenary Wood in Wales is proposed to be part of the Cymru’n Cofio / Wales Remembers project, which includes at least 19 partner organisations workings together mark the centenary of the First World War in Wales.