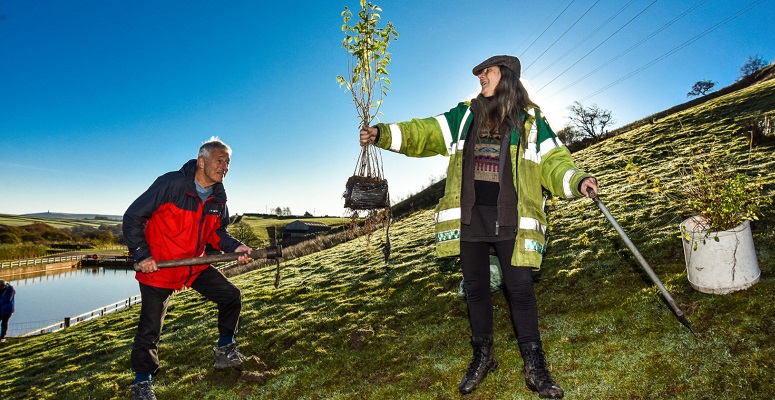 Water companies in England have today announced ambitious plans to plant 11 million trees, part of a wider commitment to improve the natural environment, to support their goal of achieving a carbon neutral water industry by 2030.

The joint proposals will see trees planted on around 6,000ha of land across England together with work to restore original woodland and improve natural habitats that themselves provide carbon capture. While some of this land is owned by the water companies themselves, additional land will be provided by partners such as local authorities, The National Trust, The Wildlife Trusts and The RSPB.

Local partnerships with councils and regional NGOs will ensure that projects include urban tree planting, to bring much needed health and wellbeing benefits to communities in towns and cities. In addition, The Woodland Trust has agreed to work with all the water companies to help identify sites and manage the planting programme once it is developed.

Many water companies already work with charities on habitat improvement and regional planting programmes. This initiative will see those local partnerships taken to a national level to ensure that the industry achieves its ambitious plan. Water companies will also look to join forces with existing initiatives such as the National Forest and Northern Forest.

The plan builds on a strong track record in habitat conservation and tree planting by the water industry. For example, United Utilities has already planted around 800,000 trees since 2005 and is committed to a further 440,000 in the next five years. Severn Trent has planted over 500,000 trees since 2015 and plans are in place for 250,000 trees to be planted in the next five years. In addition, Anglian Water has plans to plant a million trees, hedging plants and shrubs in urban areas, as part of a 25-year initiative.

The companies, including the nine major water and sewerage providers in England, have committed to fully deliver the habitat improvement programme, which will include hedgerows and grasslands as well as trees. The scheme will provide “nature corridors” to offer significant biodiversity benefits as different habitats are connected.

Companies are also committed to ensuring their plans align with government tree planting and habitat improvement programmes and has already had discussions with the Department for Environment Food and Rural Affairs, including through the Government Tree Champion Sir William Worsley. The industry already has plans in place to plant the first 2.5 million of the 11 million trees. The next priority will be to identify additional sites across England which are appropriate for tree planting or habitat restoration.

Commenting on the initiative, Sir William Worsley says: “I welcome this pledge from England’s water companies, who have clearly seen the value in planting trees and acknowledged the vital role they will play in helping us to reach net zero emissions by 2050.

“Trees are carbon sinks, provide crucial habitats for precious wildlife, mitigate flood risk and provide a valuable renewable resource in timber – and I encourage other industries to follow Water UK’s excellent example to ensure we boost planting rates across the country.”

Richard Flint, chief executive of Yorkshire Water, which is helping to coordinate the project, says: “As an industry, the water sector is committed to fighting climate change through becoming carbon neutral by 2030. Our ambitious pledge announced today will go a long way to meeting that target, and will also deliver greater biodiversity, improved water quality and better flood protection. In recent years water companies in England have made significant contributions towards tackling some of the greatest environmental challenges that we face, and today’s announcement is just the latest example of that commitment to the environment.”