England’s Tree of the Year shortlist 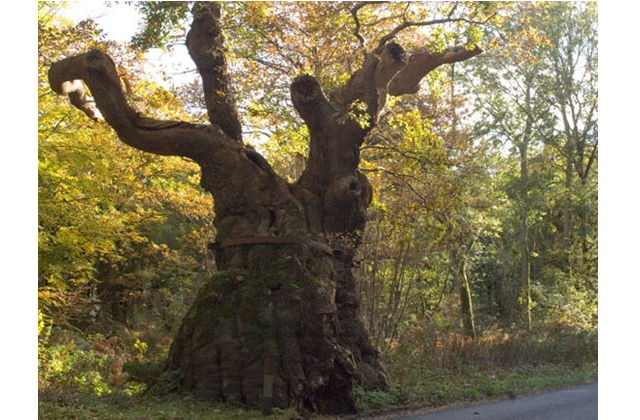 Over 200 nominations have been whittled down to a final shortlist of 10 trees in the Woodland Trust’s quest to find England’s Tree of the Year.

This tree will represent the country in the 2015 European Tree of the Year contest. Find out more below from the people who nominated the shortlisted trees and visit the tree’s record on the Ancient Tree Hunt website.

The Big Bellied Oak is an old pollard in Savernake Forest that could date back to Saxon times. The trunk’s circumference is 10.8m making it the largest oak in the forest. The Tree Council recognised its heritage in celebration of the Golden Jubilee in 2002 by naming it one of fifty Great British Trees.

This tree is amazing! It’s called the Allerton Oak and it lives in Calderstones Park in Liverpool and has done for the past 1000 years. It was used as a court during the middle ages and I think it’s just the best tree ever.

The Whiteleaved Oak tree is thought to be 400 to 500 years old and grows in the hamlet of the same name, which can be found at the southern end of the Malvern Hills. Druids and the spiritually inclined have venerated the Whiteleaved Oak for decades, with the hamlet at the epicentre of much spiritual activity. The tree even has its own visitor’s book, which has been written in since 2005.

In 1549 Robert Kett, yeoman farmer of Wymondham was executed by hanging in Norwich Castle after the defeat of the Norfolk Rebellion of which he was leader. Men from Wymondham and Hethersett marched on Norwich in 1549 after mustering under the shade of an old oak tree just inside the Hethersett boundary. The oak tree, known as ‘Kett’s Oak’, is still here today, and is sat aside the now B1172 near Hethersett.

This special Flower of Kent apple tree, situated in the historic orchard of Woolsthorpe Manor, Lincolnshire, inspired the world’s most famous scientist to develop his influential theory on gravity. The story goes that the apple fell on Isaac Newton’s head as he sat underneath. ‘Why did the apple fall down’?

The Ankerwycke Yew at Runnymede is estimated to be over 1400 years old. It has been suggested that this tree would have witnessed the signing of the Magna Carta by King John amongst other historical events.

Many different stories circulate around this historic tree, but for me it holds many happy childhood memories. Of Saturday walks and adventures, I remember when we (my brother and I) could climb up inside of the trunk.

Shugborough’s giant yew is thought to be over 350 years old, with the widest span of any tree in the UK. The circumference measures an incredible 200 yards and is thought to be the widest tree in Britain and Ireland, covering an area the size of the Royal Albert Hall and steadily spreading. Given the lifespan of many yew trees, how wide will the Shugborough Yew be in, say, a thousand years time? For me, it captures the imagination; it is a tree of fairy tales, a tree to marvel at.

Believed to be 350 years old, this stately tree continues to cast a glorious shadow over village life in Ickwell and is actually afforded the privileged position of being located within the boundary of the 175 year old cricket club.

The tree partially succumbed to a storm in 1995 which damaged a large branch that had to be removed. The fondness the local populace has for the tree ensured that something special would come of this unexpected and valued resource. The Parish Council sourced a craftsman to expertly fashion the timber into three seats that were presented to each of the greens within the Parish as a way of marking the millennium celebrations in the year 2000.

Thought to be at least over 800 years young, Old Knobbley in the village of Mistley is possibly the only tree with its own website, a page on Facebook and now, a biography in the form of beautifully illustrated children’s book. Old Knobbley is an amazing ancient oak tree with branches that just look like they want to hug you and shiny worn “steps” at the back that mark the climbing adventures of children young and old.

The Major Oak was the tree I remember vividly from childhood. 50 years ago it was a magnificent specimen and it was hollow as are most ancient oaks. I remember playing at Robin Hood by hiding in the tree with my friends. The legend of Robin Hood was infused within this mighty tree which still exists today. Sherwood Forest is a special place where you’d expect the past to suddenly appear.

The Major Oak is a very special oak tree. It lives in Sherwood Forest and is allegedly where Robin Hood and his Merry Men would use to shelter and sleep. It is about 800-1000 years old, weighs about 23 tons and is very impressive!