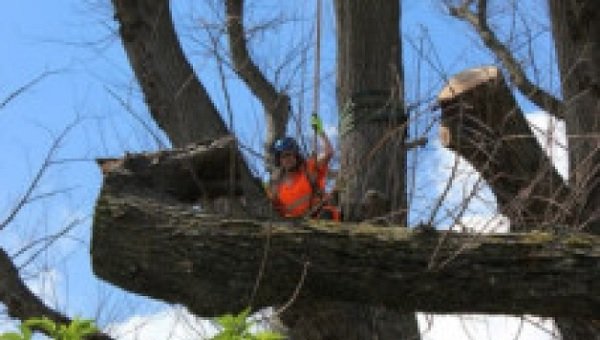 A rare elm tree reputed to be the biggest of its type in the country has been chopped down.

The Huntingdon Elm in Meadow Close, Higham Ferrers, was cut down by tree surgeon James Rose, after the decision was made it was unsafe.

The elm, which was 28 metres tall in its prime, was damaged in a storm in November 2010, when it lost a large branch, destroying a garage and conservatory belonging to a neighbouring home.

Mr Rose said: “When it lost its branch I was called out in the middle of the night in a howling gale to climb the tree and assess whether it was safe and whether the people who had been evacuated could go back to their homes. It was quite exciting, the fire service were there and the police and the Red Cross.

“We had to do quite a heavy reduction to try and save it after that, and we have done a lot of work on the tree over the years, but ultimately we had to fell it.”

The storm that brought the branch down in November 2010 was described as being like a “mini tornado”.

People living in houses within a 50-metre radius of the tree were evacuated from their homes while the tree was inspected.

One of those who was evacuated, Gary Woodock, said at the time: “The tree is very old.

“We should be grateful no-one was hurt.”

It is thought the tree was about 300 years old and it is listed in the Tree Register of the British Isles as the biggest Huntingdon elm in the country.

The decision to fell the tree was taken after an inspection showed there were no live branches anywhere in the tree’s canopy any more and that there were signs of woodworm and evidence of a large hole in the main stem.

The tree was so big, Mr Rose had to use a crane to help him fell it.

Mr Rose said: “I don’t normally get sentimental about trees, but because I’ve spent four years with this one, I got quite attached to it.

“After the storm in November 2010 I spent five days in the tree pruning it and we tried really hard over the years to save it, but we couldn’t.

“It has been an honour working on the tree and it was really sad to see it go.

“Part of the reason why we left part of the tree when we cut it down was because I didn’t have a chainsaw big enough to topple it and I didn’t know anyone who did.

“We had to use a huge 35-ton crane to help us cut the tree down and we managed to get the bulk of it down in one go. I felt a mixture of excitement and sadness when I was felling it.

“The wood will go off for milling and will probably be made into furniture.”

According to local folklore the tree is haunted by the ghost of a farmer who crashed his tractor into it and died.

Mr Rose said: “Sometimes you see flowers and a wreath at its base and no-one knows where they come from.”

He added: “It is quite rare for elm trees to reach the height of this one, normally they get to about 12 feet and they get attacked by the elm bark beetle, which carries the funghi that leads to Dutch elm disease.”