The Emerging Role of Urban Forestry in Designing Urban Futures 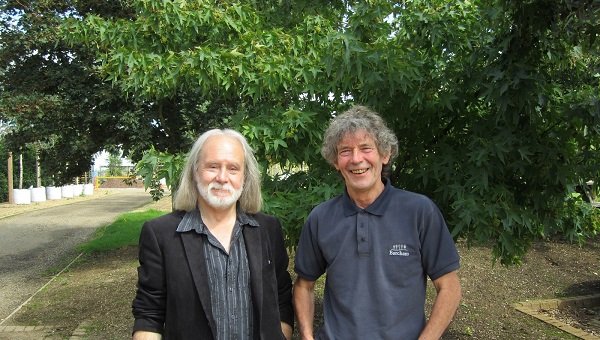 After a short summer break, the season of seminars at Barcham Trees’ Ely nursery resumed in late August when Alan Simson spoke on The Emerging Role of Urban Forestry in Designing Urban Futures in the UK.  Alan Simson is Professor of Landscape Architecture and Urban Forestry at Leeds Metropolitan University.  He previously gained extensive experience in Telford New Town, where he ran its urban forestry for more than a decade, and has been involved with eight EU research projects on urban forestry.  As a landscape architect and designer, he has been involved in forestry for 40 years.

Alan began by taking a brief look at the evolution of urban forestry.  The oldest written evidence of tree protection can be found in ancient Egypt, while Chinese cities featured trees long before European ones did.  Even by the 17th century, large cities such as Paris had very few trees, and although ancient English places such as Bath and St Albans did, these tended to be in churchyards rather than in their streets.

According to Alan, 1851 was a critical year for Britain because, according to the census of that year, the country now had a larger urban population than a rural one.  It was around this time the first trees to be planted in a public place in London were set in Margaretta Terrace, Chelsea, by architect Dr John Phene.  He believed trees could help to purify the air and to prevent epidemics.  Apparently Prince Albert was so impressed by Phene’s example, he did the same outside the then new South Kensington Museum.

Haussmann’s renovation of Paris, from 1853 to 1870, did away with many old dwellings to make room for wide, tree-lined avenues, squares, parks and other public spaces.  It was not long before other large cities such as Amsterdam and Vienna did the same.

Back in Britain, 19th century Quaker philanthropists such as Cadbury, Lever , Owen, Salt and Darby were some of the first to try and get people to live better and longer.  During the 1840s a man’s life expectancy in a large city was 26 to 30 years.  It was these Quakers who began the urban forestry movement.  Cadbury’s Bournville was well planted with trees, while Own appreciated their value in his New Lanark.  Other urban settlements followed these models.  Harrogate, Leeds and Doncaster, for example, were soon planting trees.

It was urban reformer and Utopian Ebenezer Howard on whose principles was created the first ‘garden city’, Letchworth, in 1903.  It was to have a great influence of subsequent town planning.  The inter-war years saw the rapid growth of suburbia, especially in north London as the underground train network reached further north.  These suburban areas were good places to live, and a rather romantic myth evolved around them, reflected in names such as Acacia Avenue and Cherry Close.

The new towns throughout the UK, established as three main generations from 1946 onwards, were certainly based on urban forestry.  They were generally successful, and had a higher than average ‘physical’ environment.  When Milton Keynes was built from the late 1960s onwards, many trees were planted, but a rigid and limiting species regime was practiced.  Telford, on the other hand, was rather more relaxed when it came to its species selection.

The phrase ‘urban forestry’ was originally termed in the mid 1960s by Professor Eric Jorgensen of the University of Toronto.  It was adopted in the USA in the early 1970s, with the UK following suit later.  So how is the UK faring with its urban forestry?  ‘Trees in Towns’ published in 1993 suggested we were not doing particularly well, while ‘Trees in Towns II’ published in 2008 paints an even gloomier picture which showed us planting fewer trees, felling more of them and with a third of local authorities having no working tree strategy.  ‘State of UK Public Parks 2014, From renaissance to risk?’, published in June 2014, says trees are still not being looked after well enough.

Alan Simson told delegates his inspiration from urban forestry began in Watford, and the trees he planted in 1969 and 1970 are still there.  From there he went to work on the Catterick Garrison Landscape Master Plan, where there had to be a 30m gap between the edge of any woodland and the nearest housing, 25m being the maximum distance a hand grenade can be thrown!

Then it was on to Telford, where its lunar landscape created out of old mine workings was about to be redeveloped.  The town ignored government advice to do away with the old pit mounds, instead keeping as many as possible, and planting them with trees and creating footpaths.  The fact the area was once the confluence of seven royal forests was used as a model in the creation of the new town.  New woodland was based on group planting, using 10-12 species, so treescapes were locally different in order to establish a sense of place as they grew.  This enhanced bio-diversity also created greater visual stimulation.  Sometimes known as the ‘Forest City’, Telford has six million trees, 138 species and 17 per cent tree cover, set against an English average of 10.8 per cent.  The presence of so many trees was apparently a major contributory factor in attracting Japanese investment to Telford.

In 1996, thanks to the urban forestry work he had done in Telford, Alan Simson was invited to assist with the writing of a concerted action called ‘Urban Forestry Network’ and was submitted to the EU’s Fourth Framework.  The technical evaluation was very good, but deemed ineligible under the FAIR programme.  The EU encouraged a re-write and it was resubmitted as a COST Action.

This helped to develop the concept of urban forestry in Europe.  COST Action E12 ran from 1997 to 2002, involved 20 countries and 80 experts.  It established urban forestry as a European concept and confirmed European urban forestry was different from its American counterpart.  Alan told his audience that China now looks to Europe rather than to America on the matter of urban forestry “because Europe listens, while the USA tells us what to do!”

While we may be planting fewer trees than we should in the UK, they are rising up the political agenda.  More than lip service is now being paid to the green infrastructure as urban forests are seen to have provable benefits.  Witness too the public outcry when the government announced its intention to sell off forests and the concern expressed at the recent spate of tree problems, the most recent being Chalara.

Alan pointed out that the UK Government Forestry and Woodlands Policy Statement encouraged urban tree planting, but did not mention the term ‘urban forestry’.  He also said bio-security is proving difficult to get accepted as an urban issue, while there are those who see trees as a liability rather than an asset in our cities.

Looking at the Trees and Design Action Group, which was formed in 2007, he feels it has done a great deal of good, and is pleased it has political backing.  Urban forestry is becoming increasing sophisticated, according to Alan.  Trees can increase property values by up to 18 per cent, can help to create ‘destinations’ and can improve the environmental performance of buildings by reducing heating and cooling costs.  Sites with mature trees are now worth more as development sites.  Trees also have social values and can help in a period of environmental change.  They can reduce the urban heat island effect through evapo-transpiration, and also remove dust and particles from the air.

He warned us to beware of the ‘alien vs native’ debate and the rising tyranny of ecology.  “Talk to nurseries more, take bio-security more seriously and make use of all the knowledge at our disposal”, Alan counselled.  “We procrastinate too much.  Instead, we need to act quickly, decisively and effectively”.

The afternoon session considered the designing of urban futures in the UK.  Looking at the global picture, in 1950 there were just two cities with a population of more than eight million; in 2015 there will be 33.  The urban environment is changing and must face many challenges, not least globalisation, social exclusion through unemployment and poverty, and increasing demands on its sites.

There is a paradox in the concept of the compact city.  While its functions and population must be concentrated, to be liveable it must be dispersed at local densities – and have more trees.  People who live in cities tend to say it is the quality of the streets and parks which are more important than their quantity, and it is this which encourages them to walk through them.

Alan then considered the concepts of sustainability and nature.  Sustainability means different things to different people. Perhaps it is the way things ought to be and how we ought to live.  It suggests we re-think our relationship with nature, and this is both a complex and a moral dialogue.

What is nature in a plural, urban society?  Religious belief tends to promote the idea the world was created for mankind’s sake, with other species intended to be subordinate.  One view is that nature is an object or product, while another sees it as a process, an activity and an integral part of the design and life of a city.

The day drew to a close by looking at what we can learn from elsewhere around the world.  New York City’s Battery park is a wonderful place, but still they could not resist the temptation to build on it, said Alan.  Peking has a good urban forest, but China’s third largest city Guangzhou (Canton) is the country’s urban forest capital.  Madrid’s Rio Project is a 10km long park in a city where the mayor has decided motorways no longer belong in cities.  Copenhagen has its ‘finger’ plan, but mistakes were made in its planning.

Alan concluded by saying he felt trees in cities should be not a cosmetic, but a metaphysic, should be planted en masse, not as scattered individuals or ‘orphans’.  And he asked us to talk about an integrated infrastructure rather than about a green one.