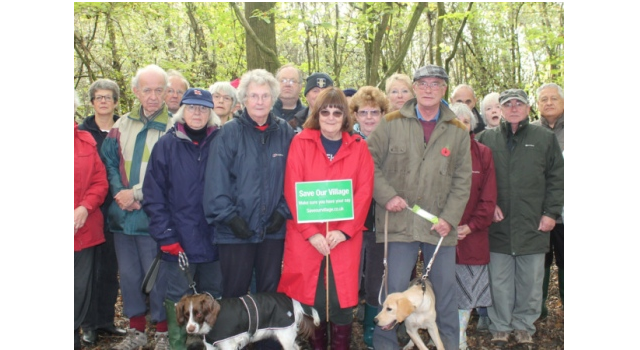 The proposed development of 55 homes in Elsenham is “greedy” and “opportunistic”, say opponents to the latest new housing scheme in the village, who have just one week left to voice their objections.

The outline application by Stansted Road LLP to build new homes on the ancient woodland of Alsa Wood is the latest in a string of unpopular developments fought by residents, who have funded their own campaign to fight the housing after Uttlesford District Council’s planning committee approved previous applications.

Chair of Elsenham Parish Council Nick Edwards said: “Quite simply, we have had applications approved in Elsenham already for more than 450 homes. This is an entirely greedy, opportunistic scheme which destroys Alsa Wood.

“Elsenham has taken much more than its fair share of housing developments – and this is one of the worst of them.”

Residents are concerned about inadequate infrastructure in the village, as well as the loss of woodland beloved by dog walkers and ramblers.

“The fact that they are taking down some of the woodland to build this housing is awful – it should be kept as it is,” said Councillor Elizabeth Parr, who represents Elsenham on Uttlesford District Council (UDC).

The developers have outlined the erection of eight two-bed end-of-terrace homes, nine two-bed mid-terrace, 14 four-bed detached, 22 three-bed semis and two five-bed detached properties on the 3.4-hectare (8.5-acre) plot off Stansted Road – which is outside the parish’s development limit.

Elsenham tree warden, Heather Salvidge, said the wood was home to ancient trees, around half of which would be destroyed if the application was approved, she claimed.

“It should be regarded as a splendid asset, not just for Elsenham but for Uttlesford. No further development should be allowed to encroach upon it,” said Ms Salvidge.

The outline application submitted to UDC says the developers have opted for “a traditional approach with use of brick, render, weatherboarding and a mix of tile, which is considered to fit well with surrounding development and which will create its own positive character and identity”.

The public consultation expires on Thursday, November 13, and Uttlesford’s planning committee is expected to make a decision on the application on Thursday, January 8.

To find out more about the application, search UTT/14/2991/OP on the UDC website, under ‘planning’.