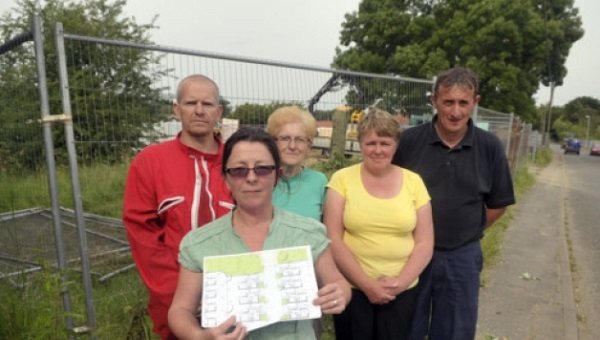 A housing association has apologised to residents after felling trees they promised would not be touched.

Circle Housing Roddons has admitted it should have told villagers before chopping down mature oak trees on the site of a new housing development in Elm.

The association had assured residents the trees would remain in place when it was granted planning permission to turn The Dale, a former sheltered housing complex in Begdale Road, into 21 new homes in April.

But householders returned home from work last week and discovered two of the four trees had been felled without any notice.

They were also told the other two would have to come down, as well, as the development could no longer continue with them in situ.

Christine Brennan, who lives next to the development in Limes Avenue, Elm, said Roddons had promised residents the trees wouldn’t be touched.

She added: “Right from the start, when the very first plans were submitted a couple of years ago, they said they would keep the trees in response to concerns from residents.

“People wanted to see the redevelopment of the old sheltered housing complex as it had become quite derelict. They wanted to see the back of it, but the trees were lovely and mature and they felt they added to the area.

“Now Roddons are saying they can’t build the houses with the trees there, but they must have known that when the plans went through.”

Mrs Brennan added: “The trees must have been at least 50 years old, it’s such a shame.

“We have been told they will plant new tree saplings, but it will take years for them to be anything like they were.”

Circle Housing Roddons said it should have kept the community informed of what was happening.

Managing director Anne Brighton said: “We always aim to preserve and protect the natural environment when building much-needed new homes and a planting programme has been put in place to replace the felled trees.

“Planning permission to remove them was only sought and approved after it became clear that we could not continue this work without damaging the existing roots.

“We are sorry that this information wasn’t shared with the local community sooner.”

A spokesman for Fenland District Council said the trees did not have Tree Protection Orders (TPO) attached to them.