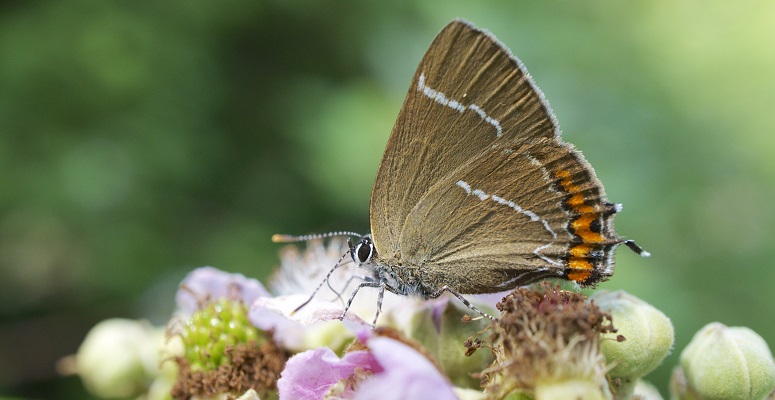 Twenty elm trees have been planted across Adur in Sompting Recreation Ground, Malthouse Meadow in Sompting, Lancing Manor Park and Shoreham’s Buckingham Park in a bid to encourage the rare White-letter Hairstreak to return to this area. The butterfly has been struggling since its natural food source, the elm tree, was wiped out by Dutch Elm disease which came to this country in the 1970s.

The Hairstreak gets its name from the white W shaped streak on its brown wings. It will only grow to the size of a two pence coin making it one of the smaller species of butterfly. It’s survival is considered a ‘high priority’ by the Butterfly Conservation charity.

Now a new partnership between Adur District Council, the Growing Communities project, South Downs National Park and Butterfly Conservation has planted 20 disease-resistant trees, the tops of which are the natural habitat of the species.

The trees, donated by South Downs National Park, were planted by volunteers with the Growing Communities project. With expertise and land supplied by the District Council at Sompting.

“I am delighted to support this project. The biodiversity of our environment is so important and while these projects might seem small they are a vital part of the larger picture of conserving the plants and wildlife that enrich us all.”

“We really hope these elm will encourage the Hairstreak to return. We haven’t seen it around here for a while but it loves flying among the leaves of the elm and we are keeping our fingers crossed. It’s really important we do everything we can to protect rare species and encourage biodiversity in our green spaces.”