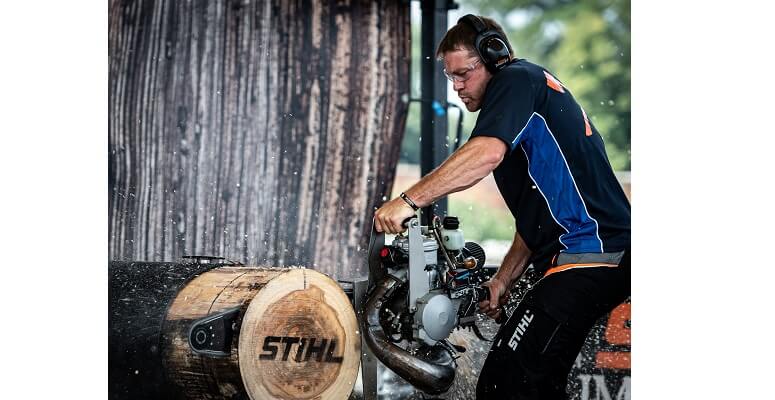 Elgan Pugh from Wales has been crowned the best lumberjack athlete in the country for the fifth consecutive time at the 2019 STIHL TIMBERSPORTS® British Championship. This came after breaking his own national record in the final discipline, the Hot Saw.

In a competition that saw competitors push themselves to the limit, 16 personal best times were set which kept a packed crowd on the edge of their seats. Whilst Elgan claimed the top spot, an ecstatic Johnny Lewis came in a close second reaching the podium for the first time with Glen Penlington taking third place.

“The British TIMBERSPORTS® Championship pushes athletes to a new level of performance and this year was no different with the competitors showcasing the skill and technique required to compete on the biggest British stage. Each athlete has completed a rigorous training programme in preparation for this event and this was clear to see in what was an action packed and stellar British TIMBERSPORTS® Championship.

“We now look forward to the STIHL TIMBERSPORTS® World Championship in Prague, where we have the difficult decision of choosing Team GB representatives from this great pool of talent.”

Elgan said of his victory:

“To be crowned the STIHL TIMBERSPORTS® British Champion is a fantastic feeling and one I am very proud of. I have been training intensively for this event and it’s great to see that it all paid off in the end.”

To find out more about the STIHL TIMBERSPORTS® Series please visit https://blog.stihl.co.uk/timbersports/