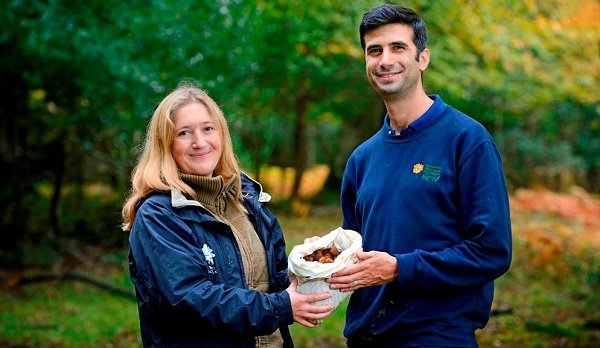 Seeds from an ancient New Forest tree earmarked hundreds of years ago for the king’s shipbuilding programme will be preserved as part of the world’s largest plant conservation programme.

A tree bearing the ‘King’s Mark’ – an arrow etched into the trunk – was one of the trees chosen to be included in Kew’s Millennium Seed Bank, made possible with funding generated by the People’s Postcode Lottery.

The New Forest National Park Authority identified the beech tree near Emery Down as one of five species to be included in Kew’s UK national tree seed project. Tree seeds collected as part of the project will be banked in the underground vaults at Kew’s country garden Wakehurst in West Sussex to ensure the species are safe for the future.

She said: “Part of the criteria for collecting seeds for the seed bank is that they have to come from semi-natural or ancient woodland of four or more hectares, to ensure they are from naturally-occurring populations.

“The New Forest has the greatest concentration of ancient and veteran trees in western Europe.

It’s exciting to think that this historic tree earmarked by the Navy hundreds of years ago will now form part of this national collection.

“The project runs until 2018 so we hope to increase the tree species collected from the New Forest.”

The seeds can play a vital role in research projects and conservation work to protect UK trees and woodlands, including against pests and diseases such as ash dieback.

The collections, and associated data, will be available to research organisations working on solutions to tackle the threats facing our woodlands.

“This project is really important for the future of our trees, wildlife and landscape – but we cannot do it all by ourselves. Contributions from partners such as the National Park Authority are absolutely vital to help us ensure all areas across the UK are covered.”

The UK national tree seed project launched in May 2013 with a list of 50 priority trees and shrubs targeted for collection.

This priority list gave ranking to individual species according to conservation ratings, prevalence in the landscape, vulnerability to pests and diseases, as well as their native status.

Kew’s Millennium Seed Bank works with a network of partners across 80 countries. It has successfully banked 13 per cent of the world’s wild plant species and is on target to save 25 per cent – 75,000 species – by 2020.