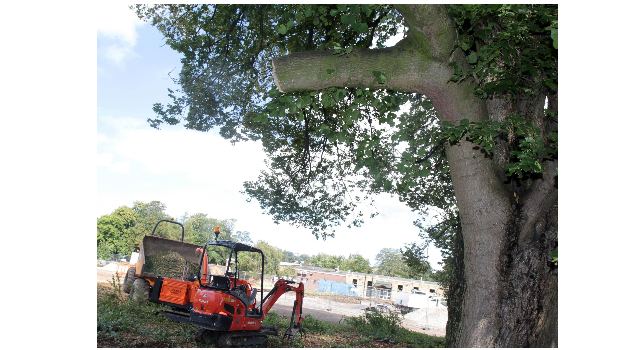 The life of a magnificent 250-year-old tree on the site of Aldi’s new Silsden store ended ingloriously on Tuesday as it was felled by chainsaws in less than five minutes.

Staff at the Ecology Building Society had battled to save the 35-metre tall lime tree which overhung its property after learning too late that the food retail giant had full permission from Bradford Council to chop it down.

And when that deadline passed this week, contractors moved in with chainsaws, said EBS Ethics Manager Anna Laycock.

She and other workers have organised online campaigns through social media to try to persuade Aldi to change its plan, but no comment or response had been forthcoming.

Aldi have also not issued any media statements on the removal of the lime tree.

However Bradford Council did confirm that planning permission had been granted as part of the overall approval for the new store.

“As I arrived workmen had already started taking off some of the big lower boughs on the Aldi side of the wall.