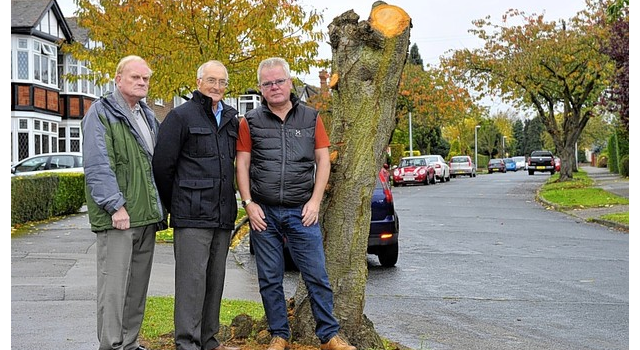 Residents in Kirk Ella say they are shocked and dismayed after council workers chopped down three much-loved cherry trees in their street.

The trees, complete with their distinctive pink blossoms, had been a feature in Westland Road for decades.

But they were chopped down after tree experts from East Riding Council discovered they were diseased.

Westland Road resident Stephen Sharp said: “The worst thing about it was that we had absolutely no warning this was going to happen. “One minute the trees were there, the next they were gone with just their stumps remaining.
“I would have thought the council could have at least sent out a letter to people explaining what was going to happen. beforehand.

“It was a dreadful shock because they are such a feature in the street.

“They are so beautiful that, if I had actually seen them being chopped down, I would have physically tried to stop them.

“You pay your council tax for people to look after trees like this, not chop them down without any warning.”

Mr Sharp said he was aware the tree outside his home had fungus on it but he believed it still appeared to be a healthy specimen.

“It had a few little mushrooms growing on it but it was solid enough and continued to give lovely blossoms every spring.

“We have lived here 23 years and we’ve enjoyed them every year since then.

“The street itself dates back to 1939 and I’m told the trees might go back that far, too.

“Now all we’ve got is an ugly stump where the tree used to be.”

An East Riding Council spokesman said the trees had been identified as being diseased during a routine inspection of trees lining public highways.

He said the disease discovered in the three trees was having an impact on their overall stability, posing a risk that they could fall over.

The spokesman said: “As a result, we were left with no alternative but to fell them.

“We will be planting replacements in this location in due course.”

The council carries out inspections on every public highway tree it is responsible for every five years.