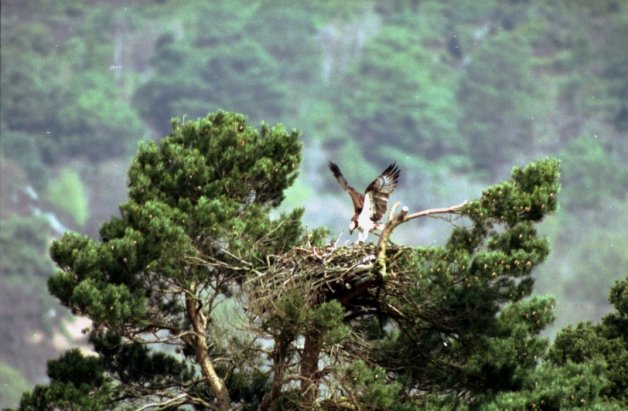 A Scots pine to which the UK’s oldest breeding osprey has returned to year after year has been named Scotland’s top tree.

The 100 year-old tree, at the Loch of Lowes nature reserve near Dunkeld, Perthshire, has been summer home to the “hardy old bird”, named “Lady” by wardens, for the past 24 years.

In that time, she has laid 71 eggs and fledged 50 chicks at the top of the pine, which has become known, not surprisingly, as “Lady’s Tree”.

In the spring, rangers had feared that Lady would not return to her nest due to her advanced age. However, they were delighted when she made her return in March and yet again, laid eggs, though this year none of them hatched.

Audiences around the world have been able to watch Lady on her tree on a special webcam set up by reserve managers the Scottish Wildlife Trust, which has proved to be extremely popular.

The tree was nominated by the Scottish Wildlife Trust and beat five other arboreal finalists from around Scotland in the annual competition, which aims to find the nation’s best loved tree.

The competition is organised by the Woodland Trust Scotland and decided by public vote.

The Trust said “thousands” of votes were received.

Lady’s Tree was crowned Scottish Tree of the Year, while The Gowk Tree in Moffat, Dumfries-shire, came second and The Clachan Oak in Balfron, Stirlingshire, secured third place.

“The osprey that nests in the winning tree – affectionately known by many as “Lady” – has laid an astonishing 71 eggs and fledged 50 chicks in the 24 years she has spent at Loch of the Lowes.

“This iconic Scots pine at the Scottish Wildlife Trust’s Loch of the Lowes Visitor Centre and Reserve is very much part of a wider conservation success story.

“Ospreys were extinct in Scotland but through dedicated conservation efforts such as the osprey protection programme undertaken at Loch of the Lowes every year, the population in Scotland is thriving once again.”

Lady’s Tree will go on to compete against trees from 12 countries from around Europe for the title European Tree of the Year 2015.

Carol Evans, director of the Woodland Trust Scotland said: “I’d like to congratulate each of the finalists for carrying out heartfelt campaigns to encourage local people and supporters to publicly back their trees, which they clearly love and value.

“Each tree represent an important part of their natural heritage.

“Lady’s Tree supports a wide range of life, from lichens and wood ants to red squirrels and of course a very famous osprey, and it has been at the heart of a conservation success story for nearly quarter of a century.

“It’s a very worthy winner, as a Scots pine it is Scotland’s national tree and I hope that the nation will give it their vote in European Tree of the Year next February.”