Driver warns of “death trap” tree on A90 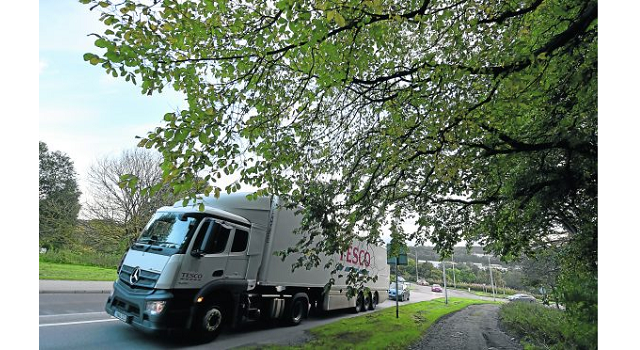 The woman was travelling along the A90 Parkway road near the Tesco roundabout on September 13 when a huge branch came crashing down onto her car, hitting the bonnet and bouncing underneath – causing extensive damage.

But despite raising the issue with both Aberdeen City Council and Bear Scotland, the debris – and remaining bit of the tree – is still in place.

Now she fears someone could have a serious accident at the spot, especially with the high winds expected on Sunday.

She said: “The tree is rotten and is hanging right over the Parkway.

“What fell down on my car is still lying there, my car was extensively damaged.

“I’ve spoken to the council and Bear Scotland about it as it’s a real hazard – I’m too scared to drive along that road now.

“It’s meant to be really windy this weekend, but it’s hanging over.

“It was really lucky as the tree branch just hit the bonnet of my car and went underneath but it could have been a lot worse.

“I have twice flagged up that this stuff is still lying there and we’re getting gales this weekend.

“This could cause a real accident if it hits someone’s roof or windscreen. It’s right on the corner as you come up the hill – when I was stopped the cars were speeding by me, so it’s a potential death trap.”

Bear Scotland has said that it has no immediate plans to take down the tree, but the situation is being monitored.

A spokesman said: “Trunk road safety is a top priority, and we carry out weekly safety inspections and patrols across all of our network to note any defects, including trees with overhanging branches, and programme any repairs as required.

“On September 13 our teams helped clear a fallen branch from the A90 Parkway after being alerted by Police Scotland.

“We will continue to monitor the trees on the A90 Parkway and programme any landscaping maintenance works as required.”