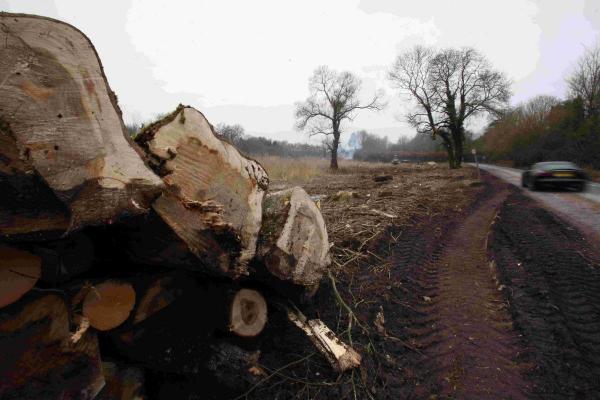 ANYONE that has taken a walk through Itchen Abbas recently might have noticed a patch of land which has been stripped of trees.

The land, off the main road through the village, was home to around 50 poplar and sycamore trees which have been removed as part of a Natural England scheme.

The area is of special scientific interest due to its location near the River Itchen.

A spokeswoman for Natural England said selected parts of the Site of Special Scientific Interest (SSSI) are being restored to fenland, which is an increasingly rare habitat.

“On those selected areas, trees which have been planted or grown within the last 100 years are being removed to allow the natural fenland vegetation to flourish,” she said.

“While it looks messy now, within a year the fenland vegetation will be restored.”

The area is owned by Test Valley Trout (Itchen) Ltd, which was given a grant by Natural England to complete the work.

Nick Price, fish farm partner, said back in the 1960s there was a government initiative to grow poplar to make matches.

“It was a different time,” he said.

“It was post war and it was about trying to make every bit of land as productive as possible.

“They (Natural England) say the trees will dry out the area and prevent it being the habitat they would like to see.”

He said that the area is part of a higher level stewardship scheme because it is deemed valuable, which means the owners are obligated to protect it.

He added that last winter around three trees fell during poor weather and he thinks that risk is now reduced.

“Despite that it is a major change I have not had any negative comments from the village because they are delighted to not have the road blocked or the danger of the trees coming down,” he said.

“It’s good to have them gone.”

There have also been discussions about creating a new footpath and verge, which Mr Price says he is happy to consider.