Disgust as ‘poisoned’ trees cut down in Falmouth 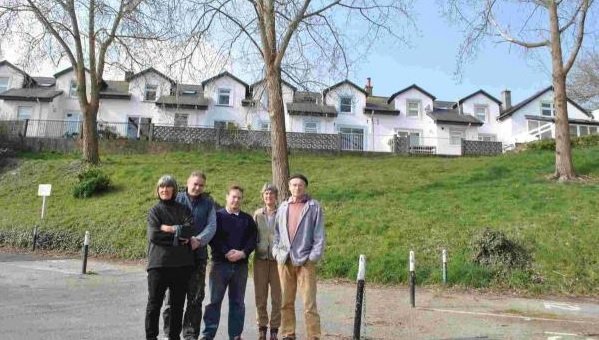 Three trees that were allegedly poisoned two years ago have finally had to be cut down, much to the disgust of local residents Council workers with chain saws arrived in Gyllyng Street, Falmouth on Thursday to cut down the 50-year-old Poplars, which had greatly deteriorated since the alleged attack.

Local residents managed to get a short reprieve but this only delayed the inevitable and the trees will eventually be chopped down.

The trees stand on a site overlooking the harbour.

Perry Stacey, who lives on the street, contacted the Packet after the arrival of the council workers. He said: “I have just walked to the end of my street where there’s a bank of beautiful trees. I have been informed that months ago they had been drilled and poisoned, and all three are due to come down.”

He described the trees as “something I’ll never see again in my lifetime”, and called it “shameful” that someone would poison them after the council had taken time and effort to make the area look nice for locals and visitors.

He added: “It’s a crying shame for the town, as trees are an important part of the area.”

Aaron Heaton, who lives nearby, said: “Two springs before now, my brother saw a guy with a cordless drill in his hand at the base of those trees, and a syringe, and he was injecting the parts he was drilling.

“He asked what he was doing, and he sauntered off, denying everything.”

He added: “A tree inspector has been round recently and said that in fact those three trees are now dying and have to be chopped down.”

Both Mr Stacey and Mr Heaton said they were unhappy that residents had not been consulted about the decision to fell the trees, and they felt the council should have looked at other measures.

A spokesperson for Cornwall Council said: “The council’s Principal Forestry Officer made the decision to fell and replace the trees following reports on their long term condition.

“The trees are in terminal decline and their condition will deteriorate.

“The decision to fell was made in August 2013, when residents were informed. Work was delayed due to budget constraints but was commissioned this financial year.

“We are keen to move forward so that the replanting can be done this season.”

Candy Atherton, the Cornwall councillor and Falmouth town councillor who represents Smithick Ward, said she had spoken to the head of forestry at Cornwall Council, who had assured her that the trees were dying and if they were not taken down, would come down “in a way that would cause difficulties.”She said she supported the decision, but after replanting she will be asking residents to report if anyone is seen to be poisoning the trees.

Falmouth and Cornwall councillor David Saunby called the act “disgusting and selfish” and said: “These three trees have enjoyed wonderful un-obstructive views of the harbour for approximately 50 years.”