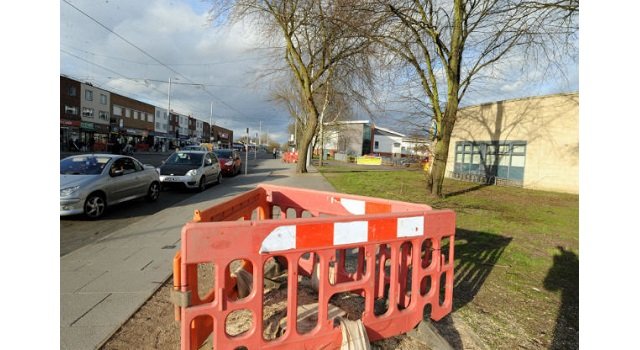 Nottingham City Council has removed ‘diseased, dying and dead’ trees from Clifton as part of ongoing redevelopment work in the area.

The council intends to plant two trees for every one taken down as part of the work to improve Clifton Market.

Yesterday on Tuesday, March 14, workers could be seen taking down some trees in Southchurch Drive and the council has said that the majority of the trees along the market were diseased, dying or dead.

trees from Woodthorpe nursery are expected to be planted soon to maintain the area’s green spaces.

And as well as replacing the felled trees, one other will be planted elsewhere in Clifton.

The works are part of the improvements being made to Clifton Market that began on Saturday, March 4.

Speaking at the time, Councillor Graham Chapman, deputy leader of Nottingham City Council, said: “Investment in our markets is important to Nottingham, as we know people really value what they’ve got to offer.

“The market brings more people to Clifton to shop and it’s up to us as a council to make the space pleasant and welcoming for the future so that the town and its traders can attract mor visitors.

“We really value our markets and the redevelopment of Clifton Market will prove that.”

The scheme will take around six months to complete, with phased stages of works taking place and is part of a wider £1 million project to improve Clifton and Bulwell markets.

It is hoped the development will encourage more people to use Clifton’s market by making it a more attractive place to visit.

The market will remain open as the works take place and council workers are trying to minimise any disruptions.